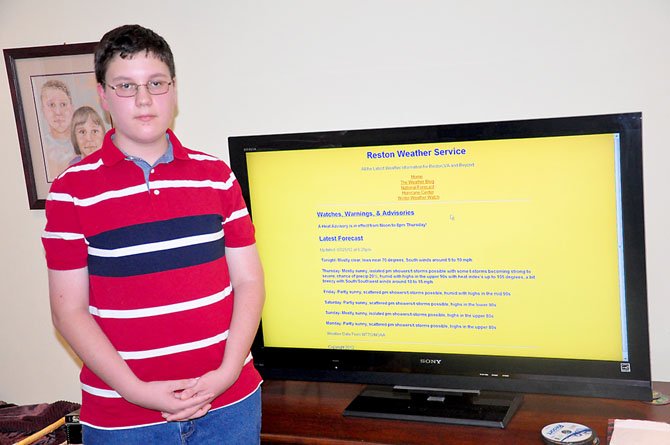 Reston — When it comes to weather, Herndon Middle School student Andrew Bottom has got it covered. The seventh grader and Reston resident has been studying the weather since his days at Aldrin Elementary School.

Bottom has been fascinated by the weather since he was in second grade, and recalls Hurricane Ernesto, which hit the mid-Atlantic region in August 2006 as being a particular catalyst.

BOTTOM TOOK A CLASS in web design to learn how to create his website, the end result of which was his severe storms site. His parents gave him the URL for Reston Weather Service as a Christmas gift.

"I do all my own HTML for the site, which can be a long process writing it out for each page, but I got used to it after a while," Bottom said. "Now it only takes me about five or six minutes."

Bottom updates his Reston Weather Service site twice a day, usually first thing in the morning and in the mid to late afternoon. It contains daily and nightly forecasts, as well as the five-day forecast.

"I put up the forecast for each day, and also make sure to post any weather advisory that is happening," Bottom said. "It’s been an interesting year, since 2012 has been one of the hottest years ever, and I was able to write about the lack of snow over the winter."

Bottom was unable to do much work after the derecho strike at the end of June, like many in the region, he lost power that Friday evening.

"From the research I’ve done, one happens about every four years, but there’s actually been a lot lately," he said. "Especially in the west. One rolled through Chicago and Cincinnati recently."

"I try to update the blog on at least a weekly basis, usually more during the summer and when there are a lot of weather-related activities going on," he said. "I think hurricanes are one of the things that interests me the most, there’s just so much power that can do so much damage involved. Any of the tropical weather systems."

He even has on camera experience, appearing on ABC7’s morning newscast in 2007, giving the forecast and other information throughout the broadcast. He also spent some time in FOX 5’s newsroom in September 2010, examining the facilities and even sitting at the anchor desk with Tony Perkins and Tucker Barnes

"They really helped solidify his interest there, he got to go on their news program, and met Bob Ryan," said his mother, Angela Bottom. "That interest led to him creating the websites, because he wanted a place to show what he knows."