Great Falls Kicks off Summer on the Green
Votes

Great Falls Kicks off Summer on the Green

June Fest leads into first edition of annual Concerts on the Green. 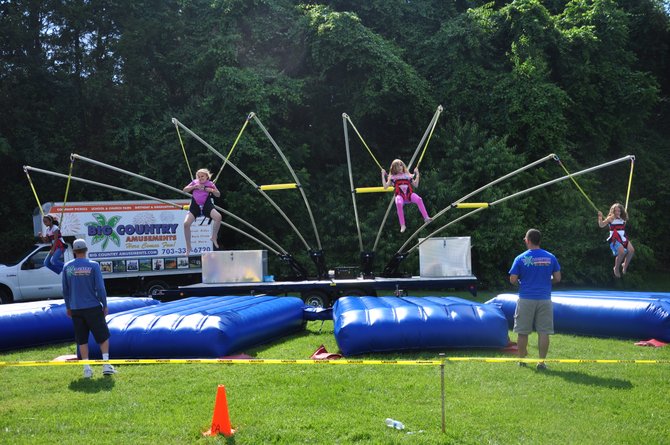 Children jump with the aid of harnesses and bungie cords at the June Fest in Great Falls Sunday, June 3. Photo by Alex McVeigh. 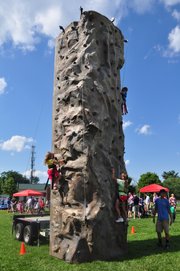 Children at June Fest at the Great Falls Village Centre attempt to reach the summit of the climbing wall, one of many games and rides at the Sunday, June 3 event.

The festival featured the largest variety of rides that has ever been featured in Great Falls. It included the standard moon bounces and slides, but added several new mechanical rides to the mix.

"These were the best rides I’ve ever been on in Great Falls, especially the mechanical bull," said Dana Armand, 7, of Great Falls. "I liked that they kept track of the time you spent on the bull, so you could compare with friends."

Though everyone who tried to ride the mechanical bull was eventually knocked off, it didn’t prevent it from being one of the most popular. Others gathered in the Tilt-A-Whirl-style machine that allowed riders to control their own spin.

"We rode a few times in a row, basically trying to make someone get sick or chicken out," said Jon Reid, 14. "But we kept riding since no one wanted to be the first to get off. It was a lot of fun though."

Other guests could try their hand at the rock-climbing wall, or if they were in the mood for something more relaxed, a simple hayride around the village center. 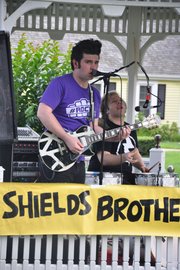 The Shields Brothers, from left, Tristan and Rory, perform during this year’s first Concert on the Green Sunday, June 3 at the Great Falls Village Centre.

"They can have their bouncing, their jumping and their spinning, I told my son that’s all well and good, but come to me when you want to do a hayride," said Paul Alphonso of Great Falls. "He never did come and find me, but I snuck on the hayride eventually."

The festival led into the first edition of this year’s Concerts on the Green, which featured The Shields Brothers, most recently seen on NBC’s "The Voice." Playing a combination of pop rock and classic rock hits, the two wasted no time getting the crowd involved, with drummer Rory Shields even taking some time mid-song to run around the green to solicit high-fives.

"I thought it was a great choice, especially to kick off the season," said Allison Fenton of Great Falls. "They’re contemporary, which got the kids excited, to see a band in person they’ve seen on TV, and they really worked to get the crowd involved with the show, which was a lot of fun."

Future Concerts on the Green will take place from 6 to 8 p.m. Sundays through July 29, with Aug. 5 and 12 serving as rain dates in case of cancellation. More information, including a complete schedule, is available at www.celebrategreatfalls.org.