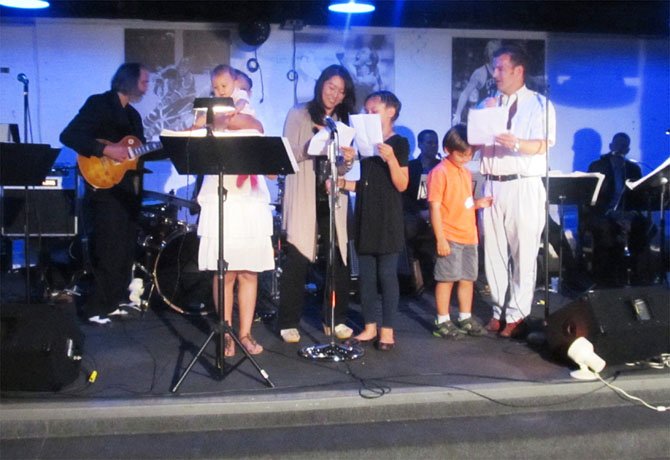 "I Got You Babe." State Sen. Chap Petersen (D-34) brought the house down Thursday, May 31, at his "Young Lawyers" bash when he and his family performed the Sonny & Cher’s hit at ICONS in downtown Fairfax. (From left) Band members: Ida Petersen, Eva Petersen (holding baby Ida), Sharon Petersen, Mary Walton Petersen, Thomas Petersen and Sen. Chap Petersen, who loosened his trademark bow tie for the performance. Photo by Victoria Ross. 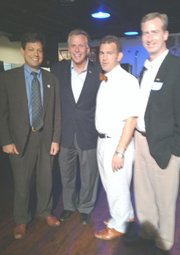 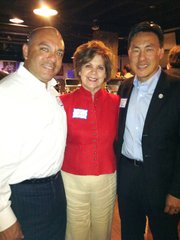 They weren’t all young, and they weren’t all lawyers, but they were most definitely all democrats at State Sen. Chap Petersen’s annual "Young Lawyers" party held at ICONS in downtown Fairfax on Thursday, March 31.

McAuliffe, who has said he will run for the Democrat nomination for Virginia next governor, as long as Sen. Mark Warner doesn’t decide to run, hinted that Petersen should try again for the Lt. Governor’s spot the last minute. Earlier this year, there was speculation that Petersen would run for governor in 2013. He said he seriously considered it, but ultimately voted no for many reasons.

"To run for public office, a lot of pieces must be in place: family, financial, professional and spiritual. A candidate must also have a vision which is congruent with the moment. Timing is everything," Petersen said.

When Petersen took the stage, he thanked his supporters and his family, and he spoke about his father, John Earle Petersen, who died on April 4, 2012.

"My father was my biggest champion. In his office, he kept all of my campaign posters," Petersen told the crowd. "I cannot say thank you enough to all the people who emailed, called or contacted me since the death of my father. He was a great father and, later in life, a great friend."