$7,500 offered for information leading to arrest and conviction. 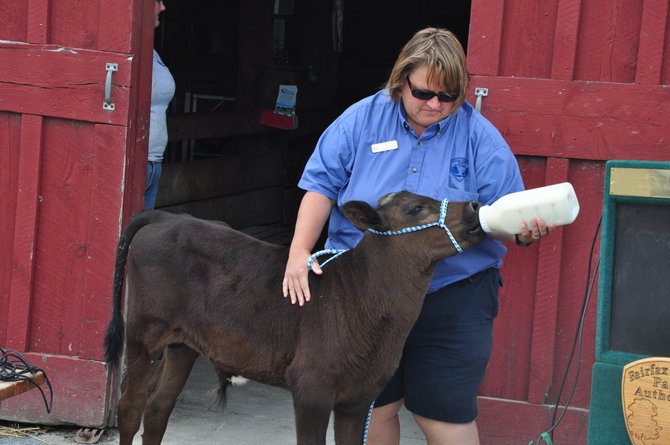 Frying Pan Farm Park Manager Tawny Hammond feeds Henry, one of the animals that suffered cuts on the head in a slashing attack last weekend. Photo by Alex McVeigh.

Herndon — The Fairfax County Park Authority announced a $7,500 reward for information leading to the arrest and conviction of the person or persons suspected of attacking animals at Frying Pan Farm Park sometime the night of May 26 or the morning of May 27. The slashing attacks left a chicken, a calf and two goats wounded.

The reward money was donated by a group of anonymous citizens who were concerned about the attack, as well as the Friends of Frying Pan Farm Park.

"The community has always supported Frying Pan Farm Park, even through this instance, and we’ve had an outpouring of anonymous donors for a reward," said Jack Pitzer, president of the Friends of Frying Pan Farm Park. "We’re so excited by the support for this park during this time, by their support of the park and the raising funds for this reward."

OFFICER BEVERLY SELLERS of the Fairfax County Police Department Reston District said she met with park staff last week to make sure people are aware of the surroundings. 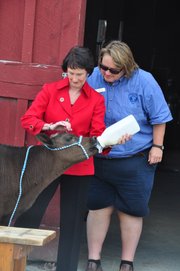 Fairfax County Board of Supervisors Chair Sharon Bulova and Frying Pan Farm Park Manager Tawny Hammond feed Henry, one of the animals attacked last weekend at Kidwell Barn. The Fairfax County Park Authority announced a $7,500 reward for information leading to the arrest and conviction of the person or persons responsible for attacks.

"There is a very, very well equipped staff here at the farm, and the police department cares about these animals and wants to see this case solved," she said.

Park Manager Tawny Hammond brought out the calf, Henry, who still has stitches in his head.

"The stitches should be coming out next week, he’s been doing very well," she said. "He’s healing nicely and should hopefully be ready for the 4-H Fair we host at the beginning of August, and the other goat, calf and chicken are healing nicely."

Hammond said the animals are generally used to interacting with humans and wouldn’t have reason for fear prior to the attacks.

"Of course initially they were traumatized, because what happened was horrible, but they’re on the mend," she said. "It did change their behavior a little, but they’re rebounding."

The barn at the park can be left unlocked and open due to fire and heat concerns, depending on the weather. The staff have implemented security measures at the park

"We don’t want to divulge specific actions that will be taken, but we have met with staff and we have put in security to protect staff and volunteers. All of our staff work as buddy pairs and we have radios on site," said Judy Pedersen, spokesperson for the park authority. "Security has been beefed up, and we believe that visitors to the park, as well as our animals, will be safe."

THE MAY 26 ATTACKS came one month after a possibly related slashing attack on three horses on an adjacent farm on April 26. Police spokesperson Lucy Caldwell

"Since we’ve had two separate incidents, it does elevate in the minds of detectives investigating this case," she said. "Detectives and animal control officers are investigating both cases, and we have many of the same detectives on both cases. At this point, other than the proximity and location, we don’t have a lot of physical evidence that we can talk about that would link them. But logically, it makes sense that we’ll be working them together."

Fairfax County Board of Supervisors Chair Sharon Bulova was on hand at the Monday press conference, and even helped feed Henry and show him to farm guests.

"I don’t know how anyone can even comprehend hurting an animal like this," she said.

Information about the incidents can be reported to the Fairfax County Police Department Crime Solvers by phone at 866-411-8477, online at www.fairfaxcrimesolvers.org, or by texting TIP187 plus a message to 274637 or by calling 703-691-2131.