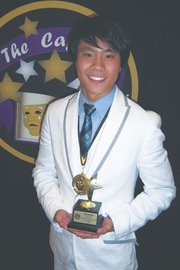 Overall, Westfield High won the most Cappies, garnering 10, including Best Musical, for "Crazy for You." The Best Play winner, McLean High, took home five awards, including Lead Actor and Lead Actress in a Play for its production of "A View from the Bridge."

Robinson’s honor was for Ensemble in a Play for the Mechanicals in its production of "Ken Ludwig’s Midsummer/Jersey." Comprising the ensemble were Jamie Green, Molly Johnson, Brandy Skaddan, Carys Meyer, Sarah Marksteiner and Mary Turgeon.

"It’s very exciting," said Johnson. "We never expected to win, but hoped to. We’re all so close with each other so we could play off each other’s energy." And, said Meyer, "Our characters were so big and exaggerated that we could have fun with them, and the audience did, too."

Green said what made their roles so great was that "since we weren’t part of the main story, we got to play around with our characters." Added Johnson: "[Playwright] Ken Ludwig gave us a lot of freedom to change things in the show."

Capturing South County’s Cappie for Male Dancer was senior Nikko Custodio. His school performed "West Side Story," and he was thrilled with his victory. In his acceptance speech, he thanked God, his parents, Director Kathie MacCormally and his dance partner Shannon Clark.

"It’s crazy – I won this category last year, too, for ‘Beauty and the Beast,’" said Custodio afterward, backstage. "I never really had any training; I just watch people dancing and copy what they do. My style is mostly hip hop, and I taught myself everything." After graduation, he plans to major in business at VCU, but says he’ll keep dancing.