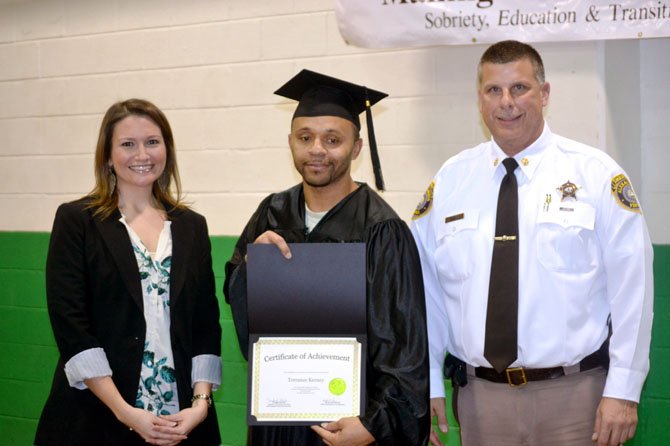 Terrance Kerney had to come east to earn his high school education.

Of course, his original intent wasn’t to come from Los Angeles to Alexandria to go to class.

Kerney has been an inmate in the William G. Truesdale Adult Detention Center in the Alexandria Sheriff’s Office for a while and took advantage of the opportunity. He had some time on his hands and instead of laying around, watching television, playing checkers and exercising, he joined the classes of Krista Sofonia, the jail's Adult Education coordinator.

Sofonia doesn’t call these classes readin’, ‘ritin’ and ‘rithmetic but she is a stern taskmaster who insists her students pay attention, study, do their homework.

Kerney was one of 13 students last year who earned their Equivalency Diploma (GED), high school education, while serving time in the Alexandria Jail. Some 20 inmate-students attended the classes and the test with a 65 percent pass rate in 2011, Sofonia said. Another inmate, Jose Zuniga also graduated with Kerney but has since left the facility.

“Earning a GED opens the student up to possibilities that were not there before, whether it’s applying to college or better employment opportunities.” Said Sofonia. “For most of them, earning a GED is the first step necessary to achieving their long term goals.”

A total of 100 inmates participated in the program last year, Sofonia said. “Obviously due to the nature of the jail business, most inmates are not here long enough to complete the program.”

Inmate Kerney wrote an essay, “How the GED Program Changed My Life:”

“The GED program changed my life in three different ways. For example, it has given me hope in furthering my education with huge confidence. It has also given me an opportunity to experience how hard work pays off. The most sastisfying thing it has given me is praise from my mom.

“The first significant impact getting my GED has done for me is giving me the audacity to strive and try to enroll into NOVA Community College upon my release. The ‘ole me’ would never had the courage or confidence to try to enroll into a college.

“I understand now that success is the sum of small efforts, repeated day in and day out so with persistence and hard work I can accomplish anything.

“During my graduation the looks and smiles on my mother’s face was priceless. I can’t remember the last time she has been soooooo proud of me. She bought two airline tickets and “flew miles and miles just to attend my graduation with my son.’ My mom believes I have a bright future now and will be able to be productive in society now.

“In retrospect I never would have imagined how dramatically me and my family’s lives would be positively impacted, all because I decided to enroll in a GED program in the Alexandria Detention Center. So based on all of the above reasons I can honestly say ‘with conviction’ that the GED program saved my life. I thank Jesus Christ for this program.”