Duo combines for 10 goals in season-opening win against The Heights. 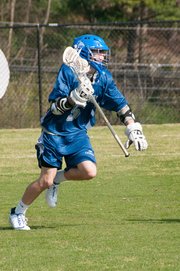 Churchill junior attacker Matt Leonard scored a team-high six goals in a season-opening win against The Heights on March 22.

The Churchill boys’ lacrosse team, loaded with goal-scoring threats of all ages, took the first step in a season of high expectations, beating The Heights 16-6 on March 22 on the campus of the Potomac private school. The Bulldogs led 7-0 after one quarter and scored the game’s first eight goals. When it was over, six different Churchill players had found the net at least once.

The Bulldogs entered the 2011 playoffs as the No. 2 seed in the 4A-3A West Region, but lost to Wootton in the semifinals for the second consecutive year. With a strong group of returning players, Churchill has its sights set high in 2012.

"We think we have a chance to make some noise," head coach Jeff Fritz said. "… We’re much more fluid, we have a much higher lax IQ this year — understanding game situations a lot better. When the game gets tight or when it gets late in the game, we’re much smarter with the ball."

"We think we have a chance to make some noise. … We’re much more fluid, we have a much higher lax IQ this year — understanding game situations a lot better. When the game gets tight or when it gets late in the game, we’re much smarter with the ball."

Leonard, who is orally committed to Towson, is one of the Bulldogs’ top offensive threats. The third-year varsity athlete scored three goals in each half against The Heights, including one in the closing seconds of the second quarter to give Churchill an 11-3 halftime lead.

"Matt’s playing very well right now," Fritz said. "… He shoots extremely well, he’s very shifty, he gets a great first move and gets a step on people. Even more impressive to me is he gets his hands free for the shot so quick. They talk about that quick release in football for quarterbacks; he’s got a quick release shooting the ball. You don’t realize he’s shooting until the ball is already past you." 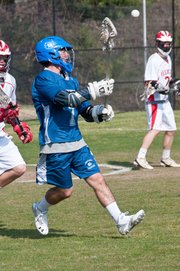 Churchill’s second-leading scorer in the season opener was the newcomer Dubick, who netted three of the Bulldogs’ first eight goals.

"Louis is a once-in-a-career kind of player," the coach said. "He’s a sensational freshman. He’s got so much upside. I’m very pleased that he’s here."

Two years ago, Leonard was a freshman on the varsity. Now he’s a veteran giving advice.

"You definitely have to be part of the team first before you put yourself above others as a freshman," Leonard said about pointers given to Dubick. "You want to let those kids know you’re here to play. … [As an older player], you want to make [a freshman] feel welcome, but you want to make sure he earns his varsity spot."

Dubick exudes confidence when talking about his place on the team and said his teammates have treated him well.

"I think they know I belong and I know that I belong," Dubick said. "That’s just how I play — with a chip on my shoulder every time. I think that I’m the best player out there, no matter what."

Churchill followed the win against The Heights with a 15-2 victory against Blake on March 24. The Bulldogs will host Paint Branch at 7 p.m. on Thursday, March 29.