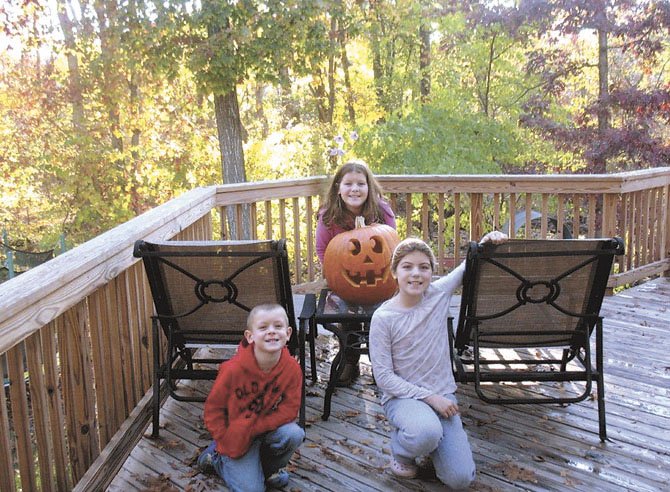 Fairfax — Skyler Hundley, a 9-and-a-half-year-old fourth-grader at Poplar Tree Elementary, lives with her parents, John and Stacey, twin sister Jordan and little brother Christian, 5, in Fair Lakes. An active girl, she likes riding her bike and scooter, jumping on a trampoline and playing CYA soccer.

She’s also a leukemia survivor and, this Saturday, March 31, in Washington, D.C., she’ll be one of the honored heroes at the annual Leukemia Ball sponsored by The Leukemia and Lymphoma Society (LLS).

Skyler was just 4 when she was diagnosed with Acute Lymphoblastic Leukemia (ALL) in April 2007. Although she seemed otherwise healthy, her parents noticed some swollen lymph nodes her under chin and took her to their pediatrician.

The doctor discovered swollen lymph nodes all over the child’s body, and a blood test revealed that her counts were severely abnormal. “My son was 8 months old then, but I went straight from the pediatrician’s to Inova Fairfax Hospital with all three kids,” said Stacey Hundley.

Skyler was admitted to the pediatric oncology ward and, the next morning, she was diagnosed with ALL. As scary as this news was, however, pediatric oncologist Jay Greenberg reassured Hundley that all would be well.

“He initially thought it was either aplastic anemia or leukemia,” she said. “But he told us, ‘Whatever she has, I have every intention of curing your daughter.’ And he and his colleagues did, so I’m very thankful to them — they were awesome.”

It wasn’t easy, though and — with a compromised immune system during her treatment — said Skyler’s mom, “An infection could have killed her.” She also worried whether Jordan had leukemia, too.

“They’re fraternal twins, so the doctors said, if she’s going to have it, it’s usually within three years of the first diagnosis,” said Hundley. “So we had Jordan tested every three months for three years, but she was fine.”

As for Skyler, “She took everything in stride and sailed through,” said her mom. “She did a lot better than I did. She was never even nauseous. And she liked going to the doctor’s because they did all they could to entertain her.”

She turned 5 in May 2007 and was able to start kindergarten that October. Skyler completed her treatments in June 2009 and her leukemia is now in remission. Throughout it all, though, she remained cheerful and positive.

“Even though she had no hair for awhile, she still had a big smile on her face,” said Hundley. “She was a trooper.”

When it was all over, Hundley breathed a huge sigh of relief. “I was thankful because I’d heard so many bad stories about what chemotherapy does to you,” she said. “But Skyler did wonderfully. She broke her toe recently while running through the house. But other than that, she’s fine.”

Now Skyler’s looking forward to attending the Leukemia Ball, and Hundley is delighted that she’s being feted. “Since it’s a black-tie affair, we got her a dark-pink formal dress and new white shoes,” said Hundley. “Hopefully, she’ll have two of them on and won’t be on crutches.”

In 2010, Skyler was the LLS’s Girl of the Year; at this year’s ball, she’ll be honored for her efforts in the fight against blood cancers. “We’ve done the Light the Night Walk for three years; and the first year, people pledged so much money that she raised over $10,000,” said her mom. “The whole family participated and Skyler walked, too. She was also in a fund-raising golf tournament in Maryland last summer with her dad.”

For the past 25 years, the Leukemia Ball has raised more than $42 million for the LLS’s National Capital Area Chapter. That’s a good thing because leukemia accounts for nearly one-third of all childhood cancers.

So what has Hundley learned from Skyler’s experience? “Don’t ever think that what happens to other people can’t happen to you, because it can,” she said. “Now I don’t take anything for granted.”