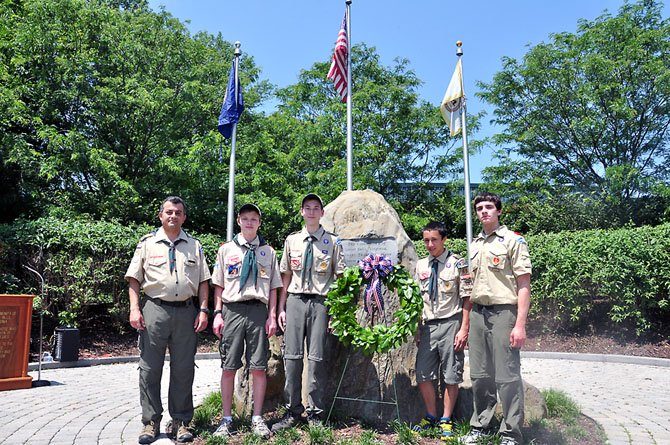 Scouts from Boy Scout Troop 55 at the Great Falls Freedom Memorial Monday, May 28, during the annual Memorial Day ceremony. Photo by Alex McVeigh.

Great Falls — Dozens gathered Monday at the Great Falls Freedom Memorial for the annual Memorial Day ceremony, honoring all who have lost their lives serving this country, including several from Great Falls. 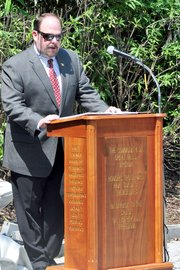 The speaker for the event was retired Lt. Commander John "Sandy" Pidgeon, a retired Navy SEAL. Pidgeon served multiple tours with the SEALs, which include Special Warfare and Exercises Office for the Sixth Fleet, military detailee to the CIA and as the first Chief of Personnel Recovery Branch. He was also the first SEAL co-pilot of the Advanced SEAL Delivery System, the first dry combatant submersible built in 40 years.

His deployments into combat include Somalia, Haiti and Iraq.

Pidgeon said he was humbled to speak at the event, and recalled some of his close friends who had been lost while serving their country. He recalled Petty Officer First Class Steven Voigt, who he credited with saving his life during a land training exercise.

"Steve and I served in Somalia together then he moved on to another platoon doing ship boardings in Haiti in 1994. In 1996 I was serving with the Sixth Fleet and received news there had been a [helicopter] crash in the Red Sea … Steve had been an aircrew rescue swimmer prior to being a SEAL, and he has asked the pilots if he could ride third seat with them. We lost Steve and the two pilots that day."

Pidgeon recalled Voigt used to go to Taco Bell almost every day during training, and said "every time I pass a Taco Bell I think of him, his humor, his camaraderie, his operational prowess and his friendship."

He also urged everyone in attendance to make sure they take advantage of the freedoms that service members fought for.

"Please honor the fallen with your service to organizations of your choice, please make sure to vote, it’s the legacy which honors their sacrifice," he said. 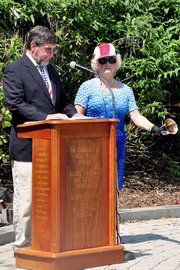 Calvin Follin reads the names of 25 fallen Great Falls residents while Sara Hilgartner rings a bell in memory of each name during the annual Memorial Day ceremony at the Great Falls Freedom Memorial.

Langley alumni Rachel Bumsted and Paul Goldberg performed "America the Beautiful" and the National Anthem during the ceremony and 25 names of fallen Americans from Great Falls were read. This year a new name was added to the list, Staff Sgt. Stephen R. Sherman, who was killed in Mosul, Iraq in February 2005.

Sherman lived in Virginia until he was 11, when he moved to New Jersey with his family.

The event also featured a new addition to the Freedom Memorial, a new Virginia state flag, which was presented by State Sen. Barbara Favola (D-31) and Del. Barbara Comstock (R-34). The flag has been flown over the state capital building in Richmond.

The flag was raised by members of Boy Scout Troop 55, which is based at St. Francis Episcopal Church.

"I think it’s a nice addition to the memorial, the other flag was getting a bit worn, and I think it was a very appropriate thing for Sen. Favola and Del. Comstock to present it to this community on this solemn day," said Rich Greene of Great Falls.

"It’s a special thing they do here every year."