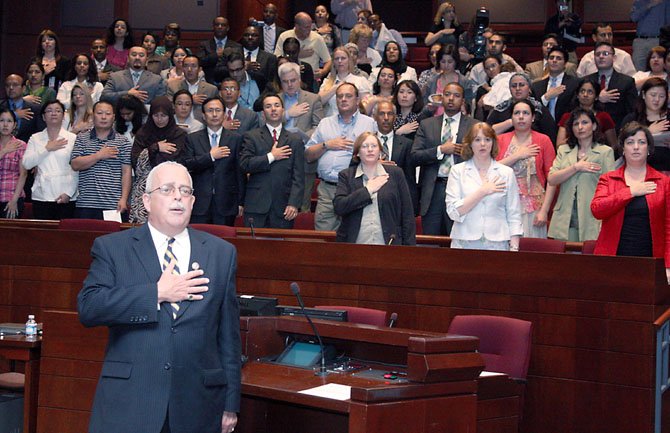 Rep. Gerry Connolly (D-11) leads 75 new U.S. citizens from 33 countries in Pledge of Allegiance at Friday’s naturalization ceremony at the Fairfax County Government Center. In his remarks, Connolly told the newly-minted citizens "you are as American as I am." Photo Contributed

And when it did, 75 immigrants - from Afghanistan to Uzbekistan - who had just raised their right hand and taken the Oath of Allegiance to become American citizens, erupted with applause and tears, waving American flags and hugging family members. They were gathered at the Fairfax County Government Center Friday, May 25, for the county’s fourth annual naturalization ceremony.

"You now join us…Every new wave of immigrants refreshes us, makes us stronger," Connolly said, leading the group in the Pledge of Allegiance. 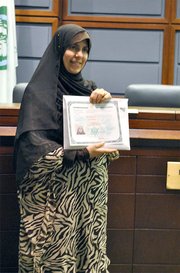 Shahinaz Hassan of Fairfax, a recent immigrant from Egypt, said she was happy to be an American citizen, and was looking forward to voting.

"I am happy for today," said Shahinaz Hassan, a recent immigrant from Egypt who lives in Fairfax. "Everything gets easier here," she said in halting English. She said she was looking forward to voting in the presidential elections this fall.

Yesuf Beshir, originally from Ethiopia, works as a government contractor in Springfield and brought his daughter, Kedja, 4, who was born in Virginia, to the ceremony. Beshir said he pursued American citizenship for many reasons.

"I am proud of being an American," Beshir said. "The main thing is democracy. Here, you can vote. You can be what you want in America. You can be president…If you want to be a doctor, you can be a doctor," he said, smiling at his daughter. "I tell her the possibilities are endless." 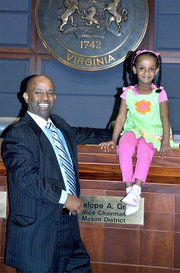 Yesuf Beshir, from Ethiopia, who works as a government contractor in Springfield, poses for photos with his daughter, Kedja, 4.

MODERATED by Corazon Sandoval Foley, the naturalization ceremony for 75 candidates from around the globe was part of the county’s Asian-Pacific American Heritage Month celebrations. The event began with the Presentation of Colors by the Fairfax County Public Safety Honor Guard and the National Anthem sung by Captain Francis Mensah of the Fairfax County Fire and Rescue Department (FCFRD).

Samuel DeVera, a captain with the county’s Fire and Rescue Department and a member of the Fairfax County Asian American Firefighters' Association, gave the keynote address, telling the audience his personal story of coming to America from the Philippines when he was 14 years old in 1983. After becoming a paramedic in 1994, he received a Valor award and, in 2010, scored first on the test to become a captain with the Fire and Rescue Department. 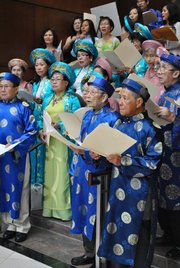 The Vietnamese American Seniors Choral Group performed patriotic songs and folk songs during the pre-ceremony of the fourth annual naturalization ceremony held at the Fairfax County Government Center on Friday, May 25.

"Look at me. The one thing I can say is work hard to make you and your families better," DeVera said. "If you’re vice president of the company, aim to be president. I’m not here to encourage you; I want to challenge you."

Board of Supervisors Chairman Sharon Bulova (D-At-large) presented the Certificates of Naturalization to the new Americans.

"Some of you have endured hardships to arrive at this time and place," Bulova said in her remarks. "All of you have invested your time, money and efforts to become citizens. Many of you came here to escape war or endless poverty."

She said she was "proud" to see the growing number of small businesses being opened by immigrants.

"Fairfax County has a very strong sense of community. Our residents and corporate neighbors are highly engaged, with a seat at the table when decisions are made…You who are here today now officially have a seat at that table."

Andrew Eade from England received a loud applause and cheers from his family and friends when Bulova presented him with his certificate. A resident of Herndon for 16 years, Eade said he wanted to become a citizen so he could "fully participate in the system and vote."

"You want to feel like you are getting your voice heard," he said.