A ‘Tremendous Turnout’ in Vienna
Votes

A ‘Tremendous Turnout’ in Vienna

At Wolftrap precinct, about 100 voters were standing in line by the time the polls opened, some having been there since 5:10 a.m. 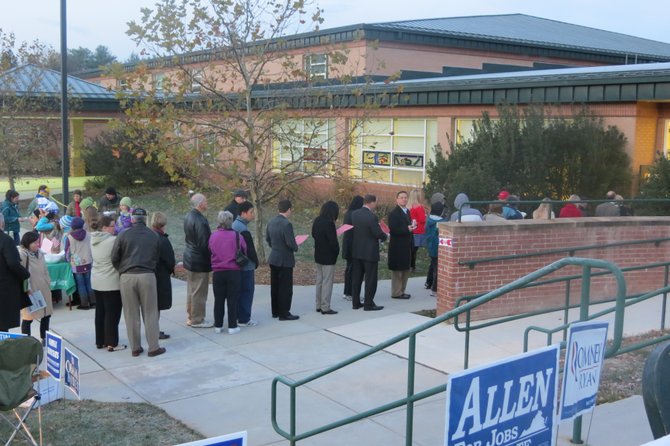 Voters stand in line at Colvin Run Elementary School at 6:30 a.m. during the morning's heaviest turnout. Photo by Jennifer Benitz

Election Day proved to be a cold, but busy morning at Colvin Run Elementary School in Vienna. With about 50 voters waiting in line by 6:25 a.m., the line extended out the door. Voters began lining up outside the polling station about 10-15 minutes before doors opened at 6 a.m.

A few volunteers stood in the cold weather much longer. Will Barlett, 24, of Vienna, had been standing outside since 4:50 a.m. waiting to hand out sample Republican voter ballots to passers-by. Others, such as Girl Scout troop 3015, had been outside since 6 a.m., selling coffee and baked goods to those who waited in line. Among those standing outside was Robert Philipp.

“In years past, we’ve had about a 70 percent turnout,” said Philipp, the assistant chief election officer at the Shouse precinct. “That’s a big turnout.”

While the early morning and evening hours have typically been Colvin Run’s busiest voting times in previous elections, things soon calmed down as fewer voters trickled in. By 7:30 a.m., the size of the line was cut in half, with only about 20-25 voters comfortably waiting inside with the cafeteria doors closed. Despite the line of voters moving swiftly through the poll booths, Jackie Garvell, the Shouse precinct chief election officer and a retired naval officer, remained busy attending to those who needed help.

Will Barlett, 24, of Vienna, hands out sample Republican voter ballots at Colvin Run Elementary School in the early morning hours.

Not far from her side was Marvin Rosenberg, a first-time election volunteer from Vienna. With 2,334 registered voters at the Shouse precinct, Rosenberg has high hopes for the turnout. “This is my first time volunteering. I’ve always been an observer for the Democratic Party and decided I wanted to see what it was like to be an election officer.”

Just down the road at Wolftrap Elementary School, the voting scene was bustling at 8:40 a.m. Finding parking space was a challenge at times, as the streets surrounding the school were lined with cars and voters heading in and out.

With 3,640 registered voters at the Wolftrap precinct, the turnout has been heavy and consistent throughout the morning. About 100 voters stood in line by the time the polls opened, some having stood there since 5:10 a.m.

The chief election officer of Wolftrap precinct, Pauline Gearhart, was in good spirits. Over 400 votes had been cast by 7:30 a.m., in addition to 531 absentee ballots cast prior to Election Day. By mid-morning, the line remained consistent with about 100 voters still waiting. While fewer voters were expected from 10 a.m. to 2 p.m., Gearhart did not expect much difference in consistency. “This is a tremendous turnout,” said Gearhart. “We usually have a high turnout of about 70-80 percent, as I recall.”

The retired school teacher and long-time Vienna resident started volunteering in elections in 1978 and helped in more than 60 elections, missing only two in the past 34 years. “I think it is everyone’s duty to help make the democratic process fair and honest,” she said. “And I try to do that in everything I do.”