‘Things … Work Out in the End’
Votes

‘Things … Work Out in the End’ 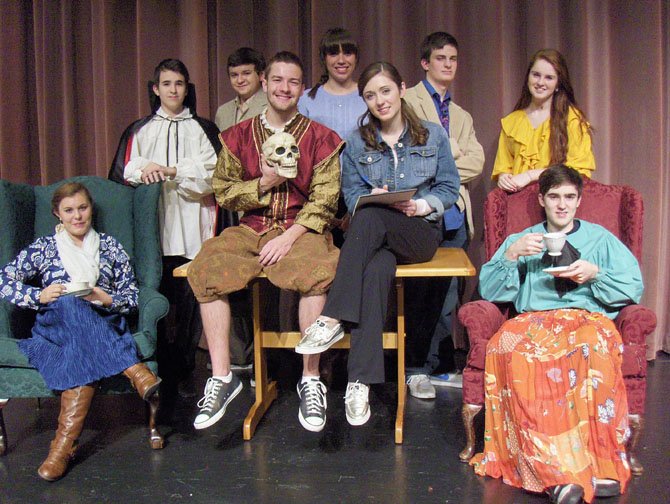 When The Moose River Playhouse in New Hampshire schedules “Dracula,” “Hamlet” and “Charley's Aunt” for its summer-stock season, something’s bound to go wrong — and it does, hilariously. That’s the premise of Westfield High’s new play, “Laughing Stock,” a comic farce and affectionate glimpse into the world of theater. 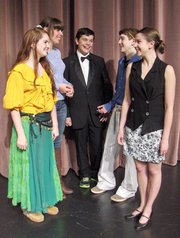 “The play’s about all the challenges, mayhem and fun of putting on shows — with crazy directors, lack of money and actors who forget lines,” said Director Susie Pike. “Yet at the heart of the show, we learn about life, our love for theater and why people have the desire to put themselves onstage and go through all the trials and tribulations of performing theater.”

She said they return to this craft because “they realize it brings friendship, love and a warmth that no other career can bring,” continued Pike. “For me, personally — after being a professional actress for over 20 years — it brings back so many fond memories of summer-stock companies and the friendships I still hold dear.”

Westfield’s play has a cast and crew of about 25 and, said Pike, “Everyone is fantastic in their roles and it’s been a joy to see them grow in this style of acting. We have a big set; it’s the interior of a barn with a stage in the center, just like in real summer stock. And we commissioned a huge moose head to be built in honor of the playhouse’s name. This is a lovely story, and the audience will enjoy seeing people working together. Things go wrong, but they work out in the end.”

Senior Mitchell Buckley portrays the theater company’s artistic director. “He’s an intelligent, well-meaning guy, but has trouble communicating his ideas to the actors,” said Buckley. “He also gets to play Hamlet and that’s fun because I love Shakespeare. The audience will like our play because it’s funny and has a lot of goofy characters.”

Playing the stage manager, Sarah, is senior Madeleine Bloxam. “She’s sarcastic because she’s trying to draw attention away from her fragile side,” said Bloxam. “She’s working with Gordon, her ex-husband, and doesn’t want people to see how much that hurts. I like my role because it’s different from others I’ve played. Sarah’s spunky and teases the rest of the cast; she also picks on Gordon with her good-natured humor.”

Bloxam said the audience will like getting an insight into putting on a production, “which they don’t normally get to see. And each character is kind of an exaggeration of someone people have worked with in theater or just know, so everyone will be able to relate to someone.”

Senior Alex Mann plays 70-something Ridgefield Hawksley, who’s participated in this summer-stock theater company since before any of the other actors were born. “He’s kind of forgetful and doesn’t remember his lines well,” said Mann. “But he gets a lot of respect because he basically built the company from the ground up.”

Mann says it’s a stretch playing someone that old. “I have to walk slowly and with a cane and speak in a deeper, more mature voice,” he said. “He’s not the best actor, and I know what it feels like to forget lines, so I can identify with that part of him. The audience will like the show because it’s funny, relatable and sweet and even has a love story.”

Portraying Daisy Coates, another elder returning actress, is senior Allie Koenigsberg. “She and Ridgefield have been with the company since they were teenagers,” said Koenigsberg. “She really enjoys the theater, the company of others and the whole creative process. I see her as the mother figure of the company. I enjoy this part because it requires more acting; I have to lower my voice, be more maternal and walk and carry myself differently.”

Koenigsberg said “Laughing Stock” shows how actors often juggle several plays at the same time, in real life. “Everyone’s really well-cast, tapping into their character’s whole persona and making it their own, which makes it more believable. And it’s so comedic, people will be laughing.”

Junior Olivia Witt plays Connie Conlin, in charge of the playhouse’s finances. “She’s organized, but worried, and is particular about details,” said Witt. “She likes her job, but gets upset when people don’t do things just the way she likes them. She also goes from sweet and calm to angry and stressed, so it’s fun showing those emotions. It’s a lighthearted show and the audience will really enjoy it.”

Witt also designed the play’s poster and cast T-shirt showing the barn with the moose at the top, drama masks and a skull from “Hamlet.” She’s taken art classes, so was happy to put them to use this way. “That’s what’s nice about theater,” said Witt. “There are different ways to show your talents.”