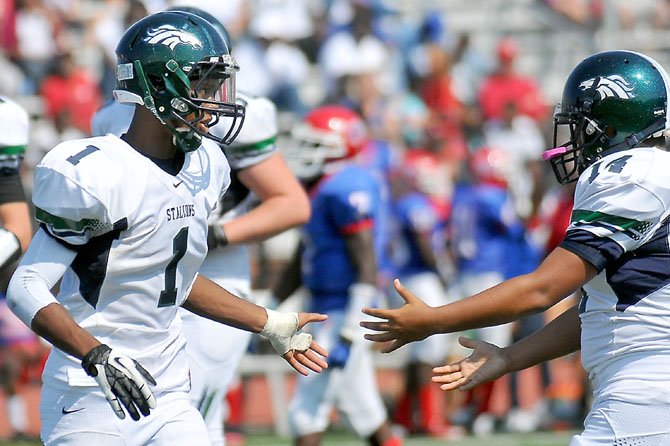 With the score tied early in the second quarter against T.C. Williams, the South County offense called a hitch route for receiver William Jackson. Things changed, however, when the Stallions got to the line of scrimmage and Jackson was left uncovered.

Jackson and quarterback David Symmes signaled one another with a tap of the helmet, changing the route. The ball was snapped and Symmes lobbed a pass down field to a wide open Jackson, who jogged into the end zone for a 67-yard touchdown.

The South County football team made it look easy on Sept. 22, cruising to a 60-28 victory on a sunny Saturday afternoon at T.C. Williams’ Parker-Gray Stadium. After losing their first three games by a combined 18 points, the Stallions set a single-game school record for points scored to earn their first victory of the season.

Symmes and Jackson hooked up for three touchdowns throughout the afternoon. Even when the Titans decided to cover Jackson, he was able to beat his man down the field. He finished with five receptions for 203 yards.

“They were pressing [covering] me the whole game,” Jackson said. “I love press. I know I can beat it so I just run right by them every time.”

SOUTH COUNTY needed a victory after starting 0-3 for the second consecutive season. Last year, the Stallions beat the Titans to spark an 11-game winning streak that carried South County to the Division 5 state championship game, where the Stallions lost to Phoebus. While the team weathered a 0-3 storm last year, head coach Gerry Pannoni said past experience doesn’t necessarily carry over.

“We have a completely different team this year. We’ve got a lot of young guys that have to step up and so far they’re doing pretty good. We’re coming along. It’s a whole different team than last year. We’re not really looking to be like last year’s team. We’re going to make our own legacy.”

This year’s group made big plays early in Saturday’s game to help give the Stallions a 21-point halftime cushion. After Jackson’s third touchdown reception gave South County a 28-14 lead, senior linebacker Oren Burks, a Vanderbilt commit, intercepted a swing pass and returned it 30 yards for a touchdown in the closing seconds of the first half.

“He does that in practice,” Pannoni said about Burks. “He’s just a long body. He’s going to make a play in space sometime out there just because he’s so long.”

T.C. Williams pulled within 10 when Malik Carney’s 43-yard touchdown run with 4:55 remaining in the third quarter cut South County’s lead to 38-28. From there, the Stallions scored the game’s final 22 points.

“We have a completely different team this year,” Burks said. “We’ve got a lot of young guys that have to step up and so far they’re doing pretty good. We’re coming along. It’s a whole different team than last year. We’re not really looking to be like last year’s team. We’re going to make our own legacy.”

South County amassed 521 yards of offense, including 280 on the ground. Warner Hunter led the Stallions with 29 carries for 127 yards and two touchdowns.

“I didn’t personally have as much of a good game on the ground as I usually have, but I think three passing touchdowns is good,” Symmes said. “[Jackson] can beat anyone.”

LeVaughn Davis and Gerald Hulett each scored a rushing touchdown for the Stallions.

South County opened the season with narrow defeats against Hayfield (36-35) and Oakton (28-21) before losing to West Potomac by two processions (49-39).

SATURDAY’S WIN appeared to be a step in the right direction.

“You’ve just got to keep thinking that you’re that team that you know you are,” Symmes said. “A good team.”