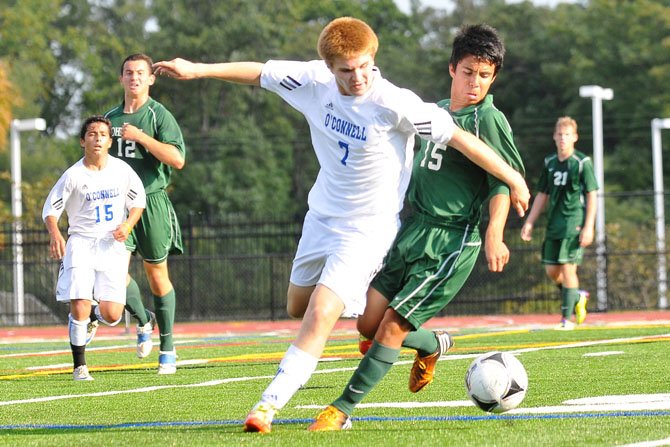 Arlington — Less than 10 minutes into an Oct. 4 match against the Bishop O’Connell Knights, a captain on the Pope John Paul the Great boys’ soccer team told his teammates on the field, “It shouldn’t be that easy! They’ve won every ball!”

At the time, the teams were in a scoreless tie. Things would not get easier for the Wolves.

O’Connell scored its first goal in the 13th minute and kept scoring until the Knights posted a 6-0 victory at O’Connell’s Monsignor James W. McMurtrie Field. The Knights produced a season-high goal total despite some of the team’s top players resting after a 1-0 loss to Paul VI the night before.

“That’s pretty much what we work on,” O’Connell senior captain Nelson Maldonado said of the team’s effort. “That’s what we kind of base our team around is winning every ball, working hard in the middle.”

O’Connell senior Brad Zemke scored a team-high two goals against JPG. After the first — a header off a corner kick early in the second half — Zemke headed toward the Knights’ bench and said “Told you, Coach!” to first-year head coach Chris Jennings.

“Brad is a senior and he has played forward his whole life,” Jennings said. “This year, I’ve been having him play in the back, so we kind of have a little inside thing going with each other. I told him he would get a chance, but I need his leadership and some other parts of his game coming out of the back.”

“My big thing for them is their energy and the consistency needs to be there every day. I thought it was a step in the right direction today.”

Zemke added his second goal in the 51st minute.

Junior Will Colclough put O’Connell on the board with a goal in the 13th minute. While that’s all the Knights would need, they would get plenty more.

Sophomore Eric Dunbar gave O’Connell a 2-0 lead with a goal in the 30th minute. Maldonado increased the Knights’ advantage to 5-0 in the 54th minute and senior Andrew Batta put the finishing touches on O’Connell’s goal scoring in the 83rd minute.

“My big thing for them is their energy and the consistency needs to be there every day,” Jennings said. “I thought it was a step in the right direction today.”

“I think the whole program is moving in the right direction,” Maldonado said. “It’s improving a lot and I think it’s going to get better from here on.”