Serving More Than a Village
Votes

Serving More Than a Village 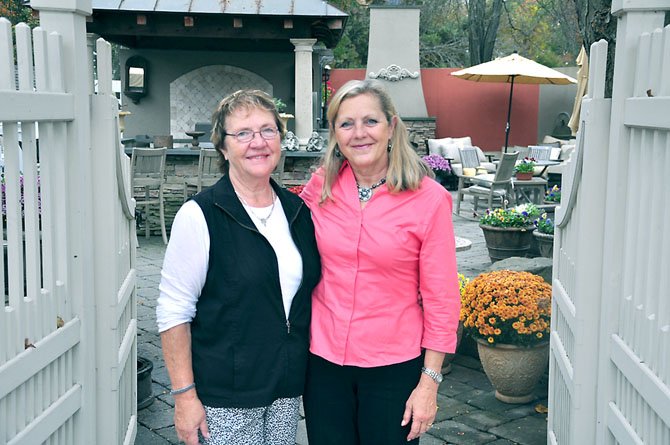 From right, Alisa Cozzens, executive director, and Chris Troger, chairman of the board of Serve A Village, Great Falls-based nonprofit. Cozzens was named the Great Falls Rotary Club’s Outstanding Citizen of the Year. Photo by Alex McVeigh.

Great Falls — The Great Falls Rotary Club named its first Outstanding Citizen of the Year, Alisa Cozzens, executive director of Serve A Village, a Great Falls based nonprofit. Cozzens moved to South Africa as a teenager, and though her travels since have taken her to Northern Virginia, she still continues outreach to the area.

“It was a complete surprise to be named Citizen of the Year,” Cozzens said. “We’ve had a great working relationship with the Rotary Club, they’ve been a huge local supporter for us.”

In past years, Serve A Village has reached out to Haiti, in the wake of the 2010 earthquake, and Russia, but most recently has focused on parts of South Africa and Kenya.

Since March of last year, Serve A Village has sponsored several initiatives and expeditions to serve the people of Africa. They collected 300 bicycles and shipped them over to be distributed to schools, small businesses and nursing homes.

THE GROUP has also worked on securing treatment for jiggers, a type of flea similar to chiggers that can get into skin and eventually cause diseases that can be fatal.

“The people need shoes to prevent jiggers from getting into their skin and eventually cause infections to the organs. Between no shoes and the dirt floors in many homes, treatment is needed,” said Chris Troger, chairman of the board. “Last time we were there, we did a weekly treatment of potassium permanganate for three weeks on the dirt floors of homes, and we’re trying to get shoes for as many people as possible.”

They have also started several projects that are designed to make an even more lasting impact. They have collected thousands of books for the local school and plan to start a library. The library serves

Vihiga County, an area with the approximate population of Great Falls, Herndon and Reston combined that has never had a library before.

“The kids there are good readers, but their school has about five or six textbooks, which seem to be from the 40s,” Cozzens said. “We’ve also started an agricultural project on the land the library sits on, and eventually we’re hoping that what they can grow there will go to help pay for the rent and salary for staff.”

Coming by books hasn’t been too big of a problem for Serve A Village, students at local schools collected books and helped raise money to send them over there.

“I think we’ve seen a lot of book donations because people are converting to iPads and Kindles, so this is a great way to get the paper books to people that can really use them,” Troger said. “The hardest part for us is paying of shipping. After a lot of shopping around, it’s still about $1,600 to ship a large carton of books over there. And it’s very hard to buy books over there, which is why we need to send them.”

In addition to books, Serve A Village has been collecting other items that are difficult to come by in Africa.

“We went to a public meeting during a trip over there with more than 1,000 seniors, and not a single one of them had a pair o fglasses,” Cozzens said. “Through donations, we were able to collect around 2,000 pairs, have them graded, and held clinics to teach the residents how to use them.”

SERVE A VILLAGE is still collecting glasses, a donation box is available at Great Falls Eyecare. The group is entirely volunteer-run, and all money donated goes to programs, outreach efforts and funds to send people overseas. Serve A Village sends over several expeditions per year, and also offers information and assistance for groups that plan to go over.

“We set up trips for our various goals, but if there are groups that want to go over, and have personal missions or goals, we do our best to help facilitate that so they can get over there and help,” Cozzens said. “We can custom-tailor expeditions for the dates and types of service people are interested in.” More information, including future expeditions and how to donate, can be found at www.serveavillage.org.