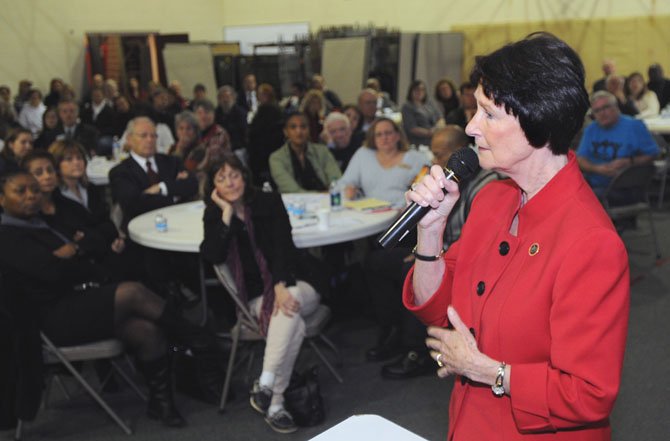 Fairfax County Board of Supervisors Chairman Sharon Bulova speaks about her experiences interviewing some of the county’s homeless population during “Registry Week,” which kicked off the 100,000 Homes Campaign on Feb. 23. “This was something I will never forget. It was one of the most powerful experiences of my life,” Bulova said. Photo by Robbie Hammer.

Volunteers, elected officials and representatives from area organizations attended a community debrief on March 4 at the Jubilee Christian Center. The debrief was held to reveal the results of a countywide survey on homelessness held the last week of February.

Despite the developing impact of across-the-board sequester cuts, and the rising cost of rental housing, the homeless population in Fairfax County declined 12 percent in the past year, and 26 percent since 2007.

Of the 1,350 people who were literally homeless in the Fairfax-Falls Church Community, 747 were people in families (55 percent of all homeless), and 603 were single.

Thirty-three percent (452 people) of all persons who were homeless were children under the age of 18, the same percentage as last year.

Single individuals account for 45 percent of all homeless persons counted, a total of 603 people.

Fifty-seven percent (341 people) of single adults who were homeless suffered from serious mental illness and/or substance abuse, a decrease from 64 percent in 2012, and many had chronic health problems and/or physical disabilities.

Twenty-two percent (134 people) of single adults were employed, and nine percent (57 people) were identified as veterans.

The U.S. Department of Housing and Urban Development (HUD) requires that jurisdictions across the nation conduct a statistically reliable and unduplicated count of the homeless over the course of one day in January. The survey covers only those who are literally homeless—in shelters, in time-limited transitional housing or those who are unsheltered and living on the street.

THE GOAL of the count is to identify the number of homeless people at a given point in time and to collect demographic information about those who are homeless to provide direction for future development of housing and services. It is also a requirement to qualify for state and federal funds.

“When we launched the 10-year plan in 2007, we fully expected to have some success,” O’Reilly said. What Fairfax County did not expect were economic hurdles such as the 2008 recession and this year’s sequester. “I think with those challenges, if that number [1,813] had remained constant, and we managed to tread water, that would have been seen as a success. But we’ve managed to reduce those numbers.”

Klein said Fairfax County’s key initiatives, such as rapid re-housing and expanding the range and availability of prevention services and resources contributed to the decline in homeless individuals.

“These numbers are very encouraging and energizing for our community of nonprofit, government, business and faith community partners who are working day-in and day-out on behalf of some of our most vulnerable citizens,” Klein said. “I am pleased to see that the strategies embedded in our 10-year plan are working.”

O’Reilly said the OPEH’s effective implementation of the Homeless Management Information System (HMIS), which prioritizes transparency and allows the county to analyze data from a number of nonprofit service providers, is an “often overlooked indicator” that provides a valuable big picture of homelessness in the county.

“Affordable housing continues to be a challenge,” O’Reilly said. “Although we have seen success in the past four years, we have significant challenges ahead with sequestration and the rising rental housing costs.”

A BRIEFING on point-in-time highlights from around the region is planned for the Metropolitan Washington Council of Governments board meeting on April 10. The highlights will be available next month through Fairfax County’s website at www.fairfaxcounty.gov/homeless.