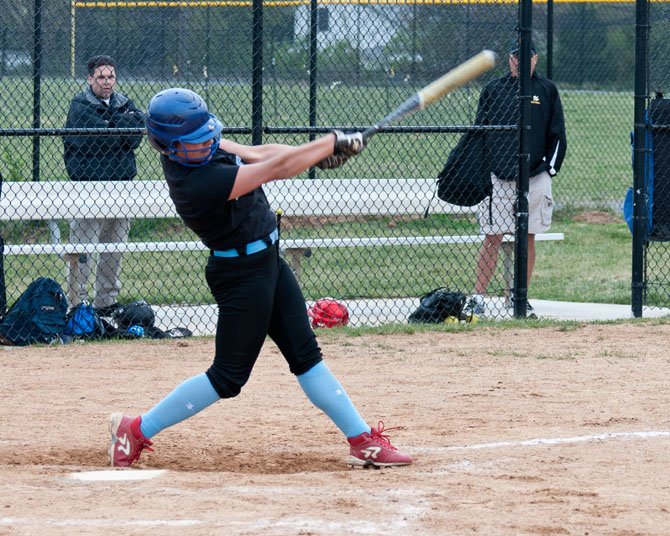 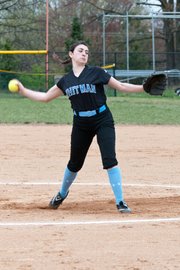 Rockville — Sophomores and juniors comprise the majority of the Whitman softball roster. On Monday, a pair of seniors helped the Vikings attain a winning record.

Pitcher Helen Rosenthal struck out six while tossing a complete game and catcher Sydney Gertzog went 2-for-4 and drove in the Vikings’ first run with a double as Whitman defeated Richard Montgomery 10-4 in Rockville. It was the Vikings’ third consecutive victory and improved their record to 4-3.

Rosenthal has pitched since her sophomore year. The senior allowed four runs and scattered 11 hits against a Richard Montgomery team that entered Monday with a 4-3 record.

“She does a great job,” Whitman head coach Anne Marie O’Donoghue said about Rosenthal. “She does get good movement. She walks very few people. Not to mention, defensively, she’s a fantastic fielder. She can really do it all for us.”

Gertzog has started at catcher for Whitman since her sophomore season. With two outs in the top of Monday’s first inning, the senior lifted a fly ball to right field that dropped for a run-scoring double. She was hit by a pitch to lead off the fourth and added an infield single in the fifth.

“We sort of lead by example,” Rosenthal said of the senior duo. “We know what we’re doing and we’ll teach them if they don’t know. With me on the mound and Syd behind the plate, we know when things are going bad we know how to calm people down and try to get everything back on track.”

“It’s huge, just being able to have hits — and even not necessarily hits, but just getting on base up and down the order makes a huge difference going [forward]. We’ve got some tough games coming up … it gives confidence to all the girls.”

Whitman trailed 2-1 after three innings, but re-gained the lead in the fourth when freshman second baseman Genevieve Anderson delivered a two-run single to right field. Richard Montgomery tied the score at 3-all in the bottom half of the inning before Whitman took the lead for good with two runs in the top of the fifth.

Gertzog, Anderson and junior shortstop Marissa Cannon each had two hits for Whitman. Rosenthal and sophomore third baseman Elena Kozak each had one hit. Eight of nine in the Whitman batting order reached base by either a hit or walk.

“It’s huge, just being able to have hits — and even not necessarily hits, but just getting on base up and down the order makes a huge difference going [forward],” O’Donoghue said. “We’ve got some tough games coming up … it gives confidence to all the girls.”

Kozak, who started as a freshman, drove in a run with a sixth-inning single on Monday.

“Athletically, she’s very, very good,” O’Donoghue said. “She has all of the tools to do it; she’s just getting more confident as she gets older.”

Whitman will host Wootton at 3:30 p.m. on Wednesday, April 17 and will travel to face Walter Johnson on April 22.