Vikings split with B-CC, WJ at Battle of Bethesda. 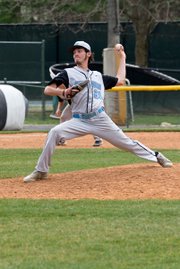 Whitman baseball coach Joe Cassidy was running out of options.

The Vikings used five pitchers during the first game of the St. Baldrick’s Battle of Bethesda on Monday, a 10-9 loss to Bethesda-Chevy Chase. When Whitman returned for the afternoon finale against Walter Johnson, Cassidy hoped junior left-hander Sam Berson could eat some innings.

“We had Sam, and then we had two other guys that we were going to ask to come back on short rest,” Cassidy said. “And then if they couldn’t do it, we’d have our third baseman, who just throws the ball over the plate.”

As it turned out, Berson would not only eat some innings, he gave the Whitman pitching staff the rest of the day off.

Berson tossed a complete-game shutout against Walter Johnson and the Vikings defeated the Wildcats 4-0 on April 14 at Shirley Povich Field. Berson surrendered just three hits and allowed only two WJ runners to reach third base. He also allowed other Viking pitchers to rest as the team competed in its sixth game in five days.

“I hadn’t pitched since Thursday, so I was just trying to save guys’ arms,” Berson said. “… I’m just trying to stay efficient --- just [pitch to] contact, get ground balls.”

Berson threw 80 pitches in seven innings, according to team stats. He struck out seven Wildcats and walked none.

What makes Berson so effective?

“He’s one of those slow-throwing lefties,” Cassidy said. “… He throws strikes; it doesn’t matter how hard you throw. Now, if he was right-handed, he’d probably be an awful JV pitcher. But since he’s left-handed and the ball moves a little, and it darts and dives and he throws strikes, [he’s effective].”

“He’s one of those slow-throwing lefties. … He throws strikes; it doesn’t matter how hard you throw. Now, if he was right-handed, he’d probably be an awful JV pitcher. But since he’s left-handed and the ball moves a little, and it darts and dives and he throws strikes, [he’s effective].”

While Berson stifled the WJ lineup, Whitman came up with some timely hits. Drew Aherne gave the Vikings an early 1-0 lead with an RBI single in the first. Second baseman Ben Castagnetti led off the third with a double and Alex Clark followed with an RBI triple, extending Whitman’s advantage to 2-0.

Castagnetti added some insurance runs with a two-run triple in the fourth.

Castagnetti finished 2-for-3, hitting the ball hard in each of his three at-bats in the leadoff spot.

Whitman second baseman Ben Castagnetti went 2-for-3 with a double and a triple against Walter Johnson on April 14.

Castagnetti is batting .375 this season despite limited preseason action. The senior was also a member of the Whitman boys’ basketball team, which played until mid-March, reaching the state championship game.

“I’m finally hitting my stride,” he said. “I’m finally starting to see the ball well and hopefully I can keep driving it like that the rest of the year.”

The win came hours after Whitman lost a late lead against B-CC in the opener. Vogel went 3-for-3 with four RBIs during the 10-9 loss. Castagnetti and Clark each had two hits.

It was Whitman’s second one-run loss to B-CC this season. The Barons beat the Vikings 6-5 on April 10, a loss that included a seventh-inning miscue that cost Whitman a two-run lead.

The Vikings (7-4) are confident they can earn a quality playoff seed.

“It was good to come back and get a win,” Castagnetti said after the WJ game. “… I still feel like we can get the 1 seed if we win out, with four losses. We finally made plays in the field in the second game and got timely hits and that’s what we need to do from here on out.”

B-CC defeated Walter Johnson 11-7 during the second game of the afternoon.

Whitman will host Wootton at 7 p.m. on Tuesday, April 22.