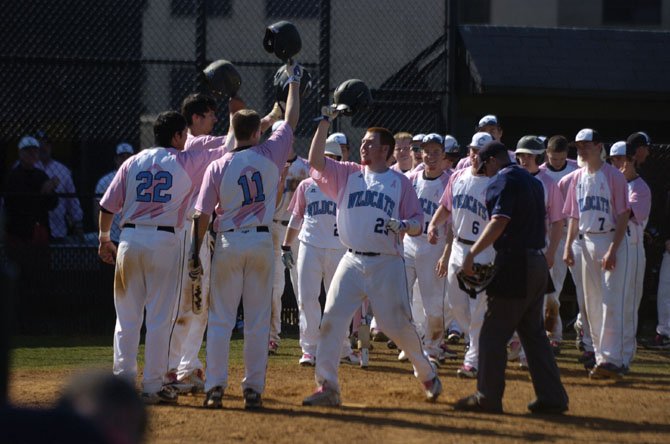 Members of the Centreville baseball team congratulate senior Matt Whalen (25) for hitting a three-run homer in the bottom of the sixth inning against Langley on April 13. Photo by Craig Sterbutzel.

Centreville — The Langley baseball team jumped on Centreville pitching for three runs in each of the first three innings during the teams’ Saturday afternoon matchup.

Despite facing a 9-3 deficit entering the bottom of the fourth inning, the Wildcats weren’t worried. After all, they still had multiple opportunities to “swing the sticks.”

“We’ve hit all year, so we know we can hit,” Centreville senior Matt Whalen said. “We just wanted to get some outs and get out of there so we can come into the dugout and swing the sticks a little bit. Our pitchers know we have their backs.”

Whalen finished 3-for-4 with five RBIs. The 6-foot-2, 225-pound first baseman hit an opposite-field three-run homer to right-center in the bottom of the sixth, producing Centreville’s final runs.

“As a big man, everybody thinks I’m going to be pulling the ball,” he said, “but I look away.”

Centreville head coach Scott Findley said the Wildcats look to hit the ball to the opposite field.

“We’ve hit all year, so we know we can hit. We just wanted to get some outs and get out of there so we can come into the dugout and swing the sticks a little bit. Our pitchers know we have their backs.”

“We hit top to bottom,” Findley said. “Even the guys that don’t get a lot of reps, they hit too. … All of our guys are really buying into our hitting approach --- gap away for the most part. We’re not really pulling the ball a whole lot --- not to say we can’t --- but we’ve been more disciplined.”

Centreville’s approach at the plate has paid off. After beating Langley, the Wildcats defeated Herndon 14-2 and Westfield 2-0, improving their record to 9-2 overall and 3-0 in the Concorde District. Centreville is averaging more than eight runs per game and has scored at least 10 runs in five contests.

Against Langley, Centreville junior AJ Catalano had four hits and senior Danny Russell had a pair of doubles and three RBIs. Junior Scott Walter had a hit and three RBIs, senior CJ Evans had a three-run double and junior Jimmy Nicholas had a two-run triple. Junior Matt Sedlock delivered a run-scoring double.

“Everybody says we’re an underdog,” Whalen said after the Langley game, “but we know we can beat anybody if we have a good day.”