How Republican Brian Schoeneman earned wrath of his party by making sure every vote counted in county.

On the morning of Nov. 6, the day after the general election, it appeared that Republican Mark Obenshain had eked out a razor-thin victory over Democrat Mark Herring to become Virginia’s next Attorney General.

Like most hotly-contested political battles, the close race generated even closer scrutiny.

National political analyst David Wasserman, with the Cook Political Report, thought there were anomalies in the absentee ballot totals for Fairfax County, which had been expected to vote strongly Democratic.

Wasserman took to Twitter with his evidence, pointing out there must be absentee ballots missing in Fairfax County, because the percentage of requested absentee ballots that had been returned and reported on election night was much lower than the percentage of other counties. Wasserman and others noticed that there were abnormally low totals in the 8th Congressional District, which includes Bailey’s Crossroads. 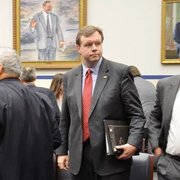 "Are we supposed to buy that just 7 percent of voters in Bailey's Crossroads who requested an absentee ballot actually voted? Preposterous," Wasserman concluded in one tweet.

Meanwhile, Brian Schoeneman, the senior GOP appointee to Fairfax County’s three-member Electoral Board, was in the midst of a post-election canvass, his first since being appointed to the board last spring. Essentially, a canvass is checking and double-checking Election Day votes, the purpose of which is to catch inevitable human errors.

Schoeneman, a well-known Fairfax attorney, Republican blogger and former Bush staffer, had been posting tweets and Facebook messages on Election Day to make the process as transparent as possible for voters.

He had also been reading the tweets from Wasserman and others. Finding no evidence of a discrepancy after an initial review, he tweeted a reply.

"To respond to rumors going around, there are zero – o – ZERO uncounted absentee ballots in Fairfax County. We completed our count last night," Schoeneman posted on Wednesday, Nov. 6, at 2:33 p.m.

Brian Schoeneman, Secretary of the Fairfax County Election Board, took to Twitter throughout Election Day and in the days following the election, to communicate with political observers who questioned the discrepancy between requested absentee ballots and actual vote counts in the statewide elections. Schoeneman’s now infamous "zero" tweet, posted on Wednesday, Nov. 6, went viral and sparked a fast and furious twitter sphere debate.

Brian Schoeneman — At a Glance

Hometown: Born in Baltimore and raised in Pennsylvania, Schoeneman came to the D.C. metropolitan area to attend The George Washington University, where he earned two degrees. He moved to Fairfax County in 2007.

Family: Married to KayAnn, the communications director for the Fairfax Chamber. The couple live in Fairfax with their 3 1/2 year-old son Nick and cat, Howie.

Public Office: Schoeneman served in President George W. Bush’s administration as special assistant and senior speechwriter to Secretary of Labor Elaine L. Chao from 2008 to 2009. In that capacity, he served as the Secretary’s lead liaison to organized labor and as a member of her senior staff. In the 2011 election, he ran against state Del. David Bulova, a Democrat, but failed to capture the 37th house district seat.

Profession: Schoeneman earned his law degree at Catholic University. He is the legislative director for the Seafarers International Union of North America, a maritime labor union. Schoeneman is co-owner and an active blogger for the right-leaning political blog Bearing Drift.

Membership & Affiliations: Member of the historic St. John’s Episcopal Church on Lafayette Square; Catholic University Law Review, published The Scarlet “L” – Have Recent Developments in Lobbying Regulation Gone Too Far?; vice president of the Wescott Ridge Homeowners Association; an active freemason, he has served as an officer in John Blair Lodge #187; member of the International Propeller Club of the United States, where he serves on the Board of Governors of the D.C. Chapter; founding member of the GW Graduate School of Political Management Alumni Association, and served as its first president; communications director for the Fairfax County Republican Committee in 2010 and former general counsel for FCRC From 2012 to March 2013. He is a member of the American Bar Association, the Fairfax Bar Association and the Federalist Society.

Over the next 36 hours, the twitter sphere exploded as hundreds of followers jumped into the fray, providing numbers, offering theories, and, at times, hurling partisan insults.

Schoeneman, in an effort to be "hyper-transparent," encouraged the crowd sourcing by engaging followers with real-time status reports.

"I'm working on figuring this out as we speak … Nobody's being rude. Dave is keeping me honest, which is fine."

"I've talked to the GR (general registrar) and we are working on this as we speak — I am convinced now too that there is an issue."

"It was my worst nightmare as an election official, the perfect storm of events," Schoeneman said last week. "During the canvass, we spent most of the day catching little errors, and we didn’t realize we had a glaring error."

Votes were temporarily underreported when a voting machine in Bailey’s Crossroads malfunctioned early on Election Day. Although the machine was later repaired, an election official grabbed the totals generated when the machine broke down, rather than the final tally — a much larger number for Herring.

Schoeneman’s transparency and his willingness to explore what went wrong on election night thrust him into the epicenter of partisan politics.

While his actions earned him the respect of many Democrats, both locally and nationally, Schoeneman also earned the wrath of some in his own party, who weren’t happy that Fairfax County’s revised count turned the tide in favor of Democrat Mark Herring.

"Anyone who knows Brian knows that he is honest to a fault, and will do everything in his power to make the (election) process as fair and transparent as possible," said Cameron Quinn, Fairfax County’s general registrar.

Chris Sanders, a local Twitter follower, said he was impressed by Schoeneman’s candid responses during the election. "He is a stand-up guy, even though we don’t have the same politics," Sanders said.

On Nov. 25, the Virginia State Board of Elections certified election results with Herring defeating Obenshain by a mere 165 votes out of more than 2 million cast statewide. Obenshain has requested a recount, which is expected to be held in mid-December.

The "found" absentee ballots and the approved provisional ballots resulted in a 975-vote new swing in favor of Democratic nominee Mark Herring. In fact, the additional votes from Fairfax County were the single biggest factor in Herring edging out Obenshain in the final certified tally.

The headline-making story spawned conspiracy theories by political activists on both sides of the aisle. While Schoeneman said he was just doing his job by making certain that every vote counted, others in his party saw it differently.

Jeanine Martin, on The Bull Elephant blog, asked "Why is Brian Schoeneman, who purports to be a Republican, helping Democrats by extending this deadline?"

Martin was referring to the Election Board’s unanimous decision to extend the provisional ballot deadline through Tuesday, Nov. 12, a full week after the Nov. 5 election, while other Virginia counties were adhering to a deadline at 1 p.m. on Friday, Nov. 8.

That decision earned Schoeneman the scorn of Republican party officials throughout the state.

"What happened in Fairfax over the last week, culminating in tonight’s announcement of a reversal in fortunes of the Virginia Attorney General candidates, was a travesty," wrote Steve Albertson, vice chairman of the Stafford County Electoral Board, in his blog. "… In doing so they raised a giant middle finger to the rest of us."

Schoeneman said it stung to have members of his own party question his integrity.

"These folks knew better. They’ve worked with me for years, and they know I’m honest and willing to address any complaints.

"One of the downsides to politics is that there are some folks — and they exist on both sides of the aisle — who want to turn everything into a ‘good vs. evil’ battle where everybody with one letter after their name is good and the other side is evil," Schoeneman said.

Schoeneman also said there were some Republicans who questioned his attempts at transparency and responsiveness through social media such as Twitter and Facebook.

"When I made that ‘zero’ tweet, I was trying to tamp down the rumors that we had missing ballots or missing votes — and by missing I mean physically not present, like a box of ballots lying around somewhere that hadn't been counted. I had confirmed with the staff that this wasn't the case," Schoeneman said.

"And I was right," Schoeneman added, "we didn't have missing ballots. We did have a major tabulation error that inadvertently left 3,000 or so votes off the results sheet, which we caught and corrected. So both sides were right — there were votes that hadn't been reported, but my tweet was also accurate, because we didn't have any missing ballots that hadn't been counted in the 8th."

Looking back on election night, Schoeneman said he doesn’t regret his infamous tweet, or any other tweets that gave the public a chance to "see into the factory where the sausage is being made."

"When folks are that cynical, it's hard to crack through to convince them that their preconceived notions about politics are wrong. I hope I was able to do that for a few people on the left — prove to them that there are Republicans out there who care about the rules, getting it right and being fair … I want the average voter to know that their vote counts."

Asked if he would do anything differently on election night, Schoeneman replied that he thought the process could be improved with enhanced communication to election chiefs.

"The one thing I know we need to do differently and would have done differently is to get our chiefs and coordinators the spreadsheet we had that included all of the mail-in absentees and absentee-in-person ballots cast by Congressional District. Had our folks in the 8th District Central Absentee Precinct had that information, they could have figured out right away that their numbers were off," he said.

Ironically, it wasn’t supposed to be Schoeneman sitting in that hot seat this highly partisan election.

Last February, Schoeneman was representing the Fairfax County Republican Committee in a lawsuit stemming from the 2012 election when the term of election board member Hans von Spakovsky, a Republican former member of the George W. Bush administration, was up.

Instead, they picked the party’s second choice: Brian Schoeneman.

"Did I ever think I’d be sitting here as an election officer? No, absolutely not. But I’m here, and I’m committed to transparency. Call it ‘Getting it right in Fairfax.’ That's kind of my new slogan," Schoeneman said, smiling.

An avid Orioles fan, Schoeneman compared the events of election night, and the subsequent fallout from the Attorney General’s saga to the World Series.

"We had a good night on Tuesday night, and a couple of nights where I thought we were in real trouble, but we patched things together and got it done," Schoeneman said. "Given that we didn't completely wrap up the process until 10 minutes before the deadline on Tuesday the 12th, the whole process felt like coming down to the last pitch of the last inning of Game 7 of the series, and having your guy hit a walk off single to win the game. And it was that stressful the whole time, too."