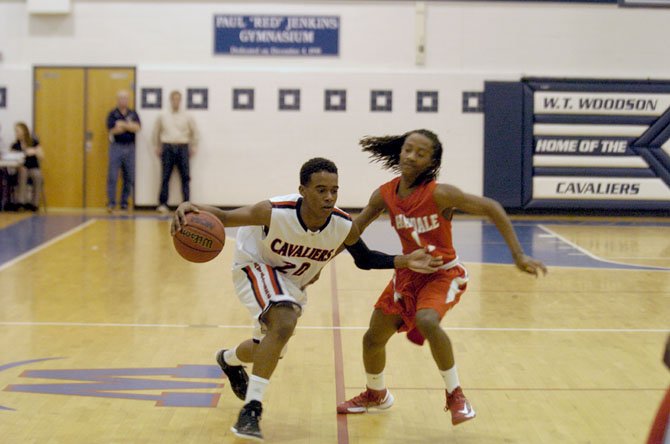 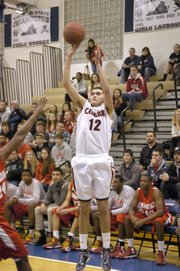 Woodson senior Alex Boock made four 3-pointers against Annandale on Feb. 12, including three in the first quarter.

Fairfax — The top-seed Woodson boys’ basketball team took care of business on Tuesday, beating No. 8 Annandale 69-51 during the opening round of the Patriot District tournament at Woodson High School. The Cavaliers advanced to the semifinals and secured a berth in the Northern Region tournament.

With the victory, Woodson reached 20 wins for the second consecutive season, including back-to-back 13-1 regular-season district records. The Cavaliers have won five in a row and 17 of their last 18 games. However, Woodson had won 12 straight at this point last season before losing to T.C. Williams in the district semifinals and Fairfax in the opening round of the regional tournament.

What is it about this year’s team that will help Woodson avoid another late-season collapse?

"I feel like this team, we have more experience, more players that have already played on varsity and in situations like this," said sophomore point guard Eric Bowles, who started for Woodson as a freshman. "We just come out and play our game and just have to do what we do to get the win."

Woodson got off to a hot start, outscoring Annandale 27-10 in the first quarter. The Cavaliers made five 3-pointers during the period, including three by senior Alex Boock.

"I’ve been in a semi-slump the past few games," Boock said, "but I didn’t really let that bother me."

Peter Murray buried Woodson’s sixth 3-pointer with 5:45 remaining in the second quarter, extending the lead to 19. The Cavaliers led 38-19 at halftime.

Annandale started to chip away in the second half and pulled to within seven when a bucket by Sanar Shamdeen cut the Woodson lead to 55-48 with 4:43 remaining in the fourth quarter. Murray responded with a three-point play and later buried Woodson's seventh and final 3-pointer from the top of the arc to give the the Cavaliers a 61-48 lead. Woodson held a double-digit lead for the remainder of the contest.

"First of all, this group has much more experience than last year’s," Murray said. "For the most part, the five starters we had on the court, other than Brandon (Stepka), last year were all [in their] first time in the district playoffs, and TC pumped up the intensity greatly in [the semifinals]. As we showed tonight, we faced some adversity --- [Annandale] made a comeback in the third and fourth quarters --- and we were able to come back and close the deal."

Woodson will face No. 4 Lake Braddock in the district semifinals at 6 p.m. on Thursday, Feb. 14 at Lake Braddock Secondary School.