Senior scores 20 points in fourth game back from finger surgery. 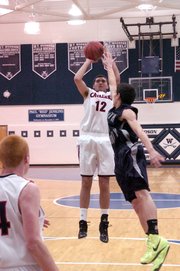 Woodson senior Alex Boock scored a career-high 20 points against South County on Jan. 15. Boock has played in four games after returning from a finger injury.

Prior to the season, Boock, a 6-foot-4 guard, suffered a torn ligament in the pinky finger on his right hand—his shooting hand—which required surgery. He missed the Cavaliers’ first 11 contests before rejoining his teammates on the court. Boock improved his productivity during each of his first three games—a trend that continued when he made his first start on Tuesday night against South County.

Boock knocked down mid-range jumpers, produced points in the paint and buried a trio of second half 3-pointers en route to a career-high 20 points as the Cavaliers beat the Stallions 62-53 on Jan. 15 at Woodson High School.

“No matter what kind of shot it is,” said Boock, whose taped pinky was not a shooting deterrent, “once you see the ball go through the net, your confidence really goes up.”

THE CAVALIERS, talented enough to go 9-2 during Boock’s absence, received a boost in potency with the return of an additional 3-point threat. His first 11 points against South County came inside the arc, but Boock eventually moved beyond the 3-point line, where he made more than 30 shots last season. His first two 3-pointers were daggers at the end of separate 7-0 Woodson runs in the third quarter. His third from behind the arc gave the Cavaliers a 50-39 advantage early in the fourth.

“[Boock is] definitely one of the better shooters on this team and he can stroke like he was doing it today,” senior Tommy Stepka said. “That’s what we need—scoring. It really improves our team [and] spreads [the production] out.”

“Getting [Alex Boock] back gives us another scoring option on the floor. We have some other guys who do really well defensively, we have some guys who are athletic and can rebound the ball, but you can never have enough guys who can put the ball in the basket.”

“We have pretty good shooters—and we have tall shooters, which helps,” Woodson head coach Doug Craig said. “… When you have guys who are 6-4, 6-5, 6-6, it really makes the defense come out. It opens up lanes for everybody else. Getting [Boock] back gives us another scoring option on the floor. We have some other guys who do really well defensively, we have some guys who are athletic and can rebound the ball, but you can never have enough guys who can put the ball in the basket.” 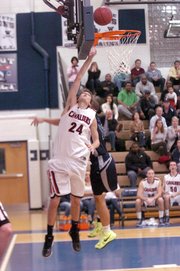 The victory improved Woodson’s record to 13-2, including 7-0 in the Patriot District. The Cavaliers went 13-1 in district play last season, only to lose to T.C. Williams in the district tournament semifinals and Fairfax in the opening round of the regional tournament. Woodson has hopes of postseason improvement, but first the Cavaliers have to get through the second half of their district schedule.

“We’ve been playing with a little chip on our shoulder, a little swagger, which is good,” Craig said. “But at the same time, too, that swagger can kind of get out of control and I think the last week or so we’ve kind of gotten away from what made us good and we need to get re-focused.”

While Woodson remained undefeated in district play, South County dropped to 2-5 in the Patriot standings. Senior guard Justin Hampton finished with a game-high 25 points, but required many shots to get there.

Along with a career-best offensive performance, Boock showed his defensive skills, as well.

WOODSON will host Annandale at 7:30 p.m. on Friday, Jan. 18. South County will host Lee at the same time.