Cavaliers’ season ends with loss to Henrico in Richmond. 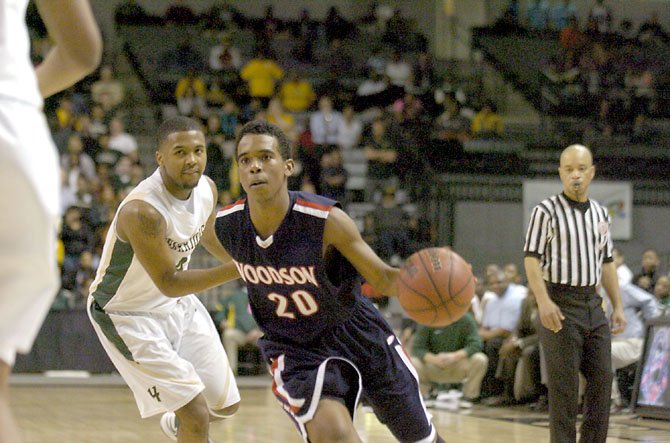 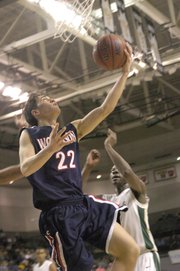 Woodson senior Michael Hansler scored a team-high 17 points during a loss to Henrico in the AAA state semifinals on March 4 at VCU’s Siegel Center in Richmond.

The Woodson boys’ basketball team made its living from the perimeter during the 2012-13 season. With multiple players capable of knocking down 3-pointers, the Cavaliers could shoot their way to a commanding lead or overcome a seemingly insurmountable deficit.

On Monday, however, it was Woodson’s opponent that set the nets on fire during the first half while the Cavaliers were sent packing following an afternoon of shooting struggles.

Woodson lost to the Henrico Warriors 75-65 in the AAA state semifinals on March 4 at VCU’s Siegel Center in Richmond. The Cavaliers shot 39 percent from the field (22-for-57), including 30 percent (seven-for-23) from 3-point range.

"We're a team that shoots the ball," Woodson head coach Doug Craig said, "and we didn't shoot it that well tonight."

Meanwhile, the Warriors shot 54 percent (25-for-46), including knocking down seven of nine 3-point attempts in the first half, helping Henrico build a 42-29 halftime advantage.

“This is a great high school team that we had this year and I really thought we had the potential to get to the state championship, but you can’t win every game,” Woodson sophomore point guard Eric Bowles said. “If a team shoots better than you, there’s nothing you can do about it. Even if you’re playing good defense and they’re still making their shots, there’s just nothing you can do.”

DESPITE AN OFF-SHOOTING NIGHT, Woodson still had a chance late in the contest. Senior forward Peter Murray beat the buzzer with a 3-pointer at the end of the third quarter, cutting the Henrico lead to 52-48. A pair of free throws by senior guard Michael Hansler trimmed the Warrior advantage to 58-55 with 4:49 remaining in the game, but the Cavaliers couldn’t get over the hump.

A three-point play by Murray brought Woodson’s deficit to 64-59 with 3:38 left in the game, but Henrico scored the next six points and remained in control.

“I don’t know how many fans we had here tonight, but it was ridiculous. I told the kids, these are the things that you’re going to remember 20 years from now when you come back for your high school reunion.”

“It's always frustrating in that situation," Murray said about getting close but not being able to get over the hump. "Like coach said, shots weren’t falling tonight and that seemed to be the dagger tonight for us. Normally, if a team is going to come out and out-shoot us, that’s going to be a problem for us, especially from the 3-point line, because that’s where we’ve had success throughout the year. … Mentally, it is hard when your shots aren’t falling, but our team kept shooting, we kept working hard and we kept trying to cut the lead back, but it didn’t work out at the end.”

The Cavaliers had plenty of fan support during the game as at least 10 buses transported Woodson students to Richmond for the 3:15 p.m. contest. The “WT Woodson Cavalry” was fired up when Murray’s buzzer-beater pulled the Cavaliers within four entering the final quarter.

“We got the crowd back into the game and that was the pivotal point there,” Murray said. “Hopefully we could make a run off that, but [Henrico] came out and adjusted to everything we had and came out and beat us in the fourth quarter, which was the turning point.”

WOODSON FINISHED THE SEASON with a 25-5 record. The Cavaliers went 13-1 against Patriot District opponents during the regular season and entered the district tournament as the No. 1 seed. Woodson lost to Lake Braddock in the district semifinals, but bounced back to win the school’s first outright region championship in its 50-year history. The Cavaliers trailed Wakefield by 19 points entering the fourth quarter of the Northern Region tournament final on Feb. 23 and came back to win 75-70 in overtime.

Woodson beat Battlefield 65-52 in the state quarterfinals on March 1 at Robinson Secondary School, earning the Cavaliers a trip to Richmond.

“I don’t know how many fans we had here tonight, but it was ridiculous,” Craig said after the Cavaliers' loss to Henrico. “I told the kids, these are the things that you’re going to remember 20 years from now when you come back for your high school reunion.”