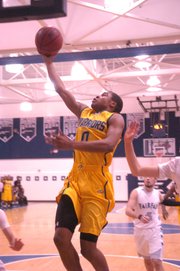 Wakefield sophomore Marqua Walton, seen against Fairfax on Nov. 30, made six 3-pointers and scored a career-high 26 points against Stonewall Jackson on Dec. 28.

Upon hearing the numbers, Walton replied: “26 points and six 3-pointers?” in a pleasantly-surprised tone.

Khory Moore and Ermias Nega are the offensive leaders of a Wakefield team that finished 2012 with an 8-3 record. But if Walton can emerge as the type of scorer who isn’t surprised by big numbers, there’s no telling what the Warriors could accomplish.

Making his first varsity start, Walton buried six first-half 3-pointers and finished with a career-high 26 points as Wakefield defeated Stonewall Jackson, 97-88, on Dec. 28 for a fifth-place tournament finish. With one teammate injured and another out of town, Walton was pressed into a starting role and thrived with 20 first-half points. His previous single-game career-high was 11 against Washington-Lee on Dec. 11.

“I felt like I had to step up,” Walton said. “Not just coming-off-the-bench stepping up, I had to be a starter and come out there and get some points on the board.”

Walton made four 3-pointers in the second quarter as Wakefield traded blows with an athletic Stonewall Jackson team led by senior guard J.R. Washington, who scored 61 points in a single tournament game and finished with 21 against the Warriors. A 3-pointer by Nega in the closing seconds of the first half gave the Warriors a 47-45 halftime lead they would not relinquish.

“[Marqua Walton] shot the ball lights out tonight and … he’s got to do that more because everyone knows about Khory Moore [and] people are starting to find out about Ermias. So now if we can get a three-headed monster with him stepping up like that, it’s going to be hard to defend us.”

“I told [Walton] in 11 years I’ve been here, there’s only been one other sophomore that shot the ball as good as him, and that was Ramferi Gomez, who had 29 points against Washington-Lee on nine 3-pointers,” Wakefield head coach Tony Bentley said. “He shot the ball lights out tonight and … he’s got to do that more because everyone knows about Khory Moore [and] people are starting to find out about Ermias. So now if we can get a three-headed monster with him stepping up like that, it’s going to be hard to defend us.”

Moore, who was named to the all-tournament team, also scored 26 points for Wakefield. The senior guard made 13 of 15 from the free-throw line, including all eight of his attempts in the final minute. Moore scored 11 of Wakefield’s final 15 points.

“We don’t really face that many teams as athletic as us,” Moore said. “I like when they test us to see where we’re at.”

Wakefield entered the consolation bracket after losing its opener to Ballou, 68-67, on Dec. 26 despite leading by 17 points at halftime. Moore left the game in the opening minutes of the first quarter after sustaining a cut above his left eye that required nine stitches. Moore returned the following night as the Warriors defeated Calvert Hall on Dec. 27 before beating Stonewall Jackson on Dec. 28.