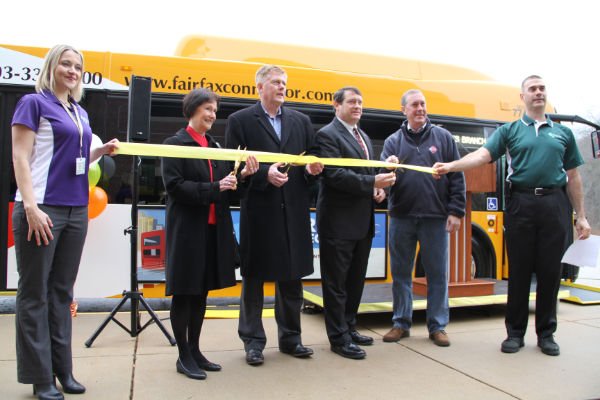 The new bus service will use the 495 Express Lanes

Buses will travel, on average, 55 mph on the Beltway, even during rush hour.

For more information, go to www.fairfaxcounty....

The service is the first in the county to use the express lanes, and the first public transportation offered between the two locations.

Photo by Andrea Worker <cl>Dave Courtney of Burke was heading to Crystal City via the VRE on Monday, Jan. 14, but he stopped to get some information from Christin Wegener, Fairfax Connector manager of Operations Planning and Customer Service.

The inaugural run of the new Fairfax Connector Service from Burke Centre VRE station to Tysons Corner using the Express Lane loads up with passengers, including local officials, area residents and members of the press.

“This is exciting stuff,” said Bulova. “It’s a marriage between the VRE (Virginia Railway Express) and our Fairfax Connector system, working with VDOT and the Express Lanes. People have to pay tolls to use those lanes,” Bulova reminded. “It’s a tremendous opportunity for commuters, shoppers and business people.”

After the speeches and the acknowledgements of the efforts behind the scenes, it was time to get on board the brand new bus and experience the trip. Obviously, traffic patterns on Saturday morning differ from the weekday commute. FCDOT Director Biesiadny says the average trip should normally run about 40 minutes one way. There are four different routes. Routes G and J are basically mirror images of each other, covering the major employers in the Tysons area and giving commuters a choice of directions depending on where they want to disembark. Route F is the longest, covering the largest portion of area. “M route is the one for you if you are heading to Tysons for the shopping,” said Christin Wegener, manager of Operations Planning and Customer Service with Fairfax Connector.

As an introduction to the commuting public, FCDOT is offering the service for free for the first two weeks. Starting Jan. 26, a one-way fare will cost $3.65 with a SmarTrip card, or $4 cash. Additional routes are scheduled to begin service to Tysons in March from the Lorton VRE station and from the new Saratoga Park and Ride. The full schedule, route and other commuter resource information are available at www.fairfaxconnector.com/express.