As Washington prepares for Presidential Inauguration, Jim Upp, Scott Shipe, and Gray Parks recount their experiences of 64 years ago. 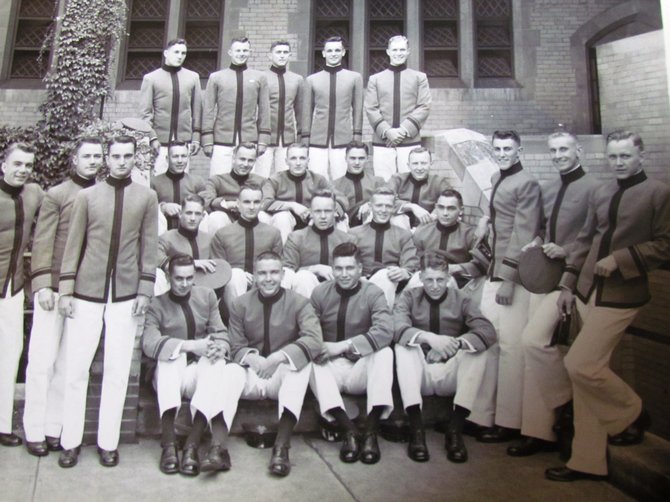 Scott Shipe, who lived in Springfield for 50 years before moving to Greenspring, is pictured second from left (top row) in this photo of West Point Military Academy cadets. Photo Contributed

The inauguration of President Truman in 1949 produced many firsts—first to be nationally televised, first to be openly integrated, first to debut the current presidential seal. 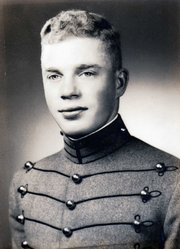 It was also the first inauguration attended by 16-year-old Jim Upp, 20-year-old Scott Shipe, and 20-year-old Gray Parks. All three are now neighbors at Greenspring retirement community in Springfield, but also have in common the experience of participating in the 1949 parade. Upp was an Eagle Scout positioned along the parade route; Shipe and Parks were West Point cadets marching with their units.

SECURITY at the inaugural ceremonies has tightened over the years. At President Barack Obama’s second inauguration, planned Monday, Jan. 21, there will be a strong presence of ground, air, water and even Metrorail security provided by a variety of law enforcement officials and public safety agencies.

“We saluted as the president’s vehicle passed by,” said Upp. “I also remember it was very cold.” According to records, it was a windy 38 degrees that day in the nation’s capital. Upp noted that the scouts were asked to remove their coats in order to display their full uniform when they saw the parade vehicles approaching. 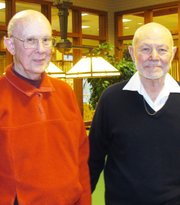 Upp grew up in Southeast Washington, D.C., and at age 14, was one of the youngest scouts to reach the rank of Eagle Scout. The 1949 inauguration was not the first unique opportunity that arose for Upp due to his scouting status. Just two years prior, he recalls being selected to serve as the escort for the young son of the president of Mexico, Miguel Aleman, when he visited the U.S. in 1947. “We rode around in a Lincoln sedan and were thrilled to have discovered the power window buttons,” said Upp.

Upp’s neighbor at Greenspring, Scott Shipe, was a first-year plebe at West Point in 1949 when his unit, the first regiment, second battalion, marched in the inaugural parade. Also remembering the day as chilly, but sunny, Shipe recalls his presentation. “We were dressed in full dress uniforms with rifles and bayonets,” said Shipe. “We also wore our tar bucket hats with brass buttons on each side.”

Shipe recalls marching in formation with the Corps of Cadets that day and being whisked back to West Point shortly afterwards. “We got right back on the train when the parade was over,” said Shipe.

Shipe had attended Officer Candidate School for the U.S. Army before entering West Point and spent about 10 years in the U.S. Army in total. He graduated from West Point in 1952 and served in the Korean War before being medically discharged. Shipe then attended graduate school and a doctorate program in St. Louis, Mo. before moving to the Washington, D.C. area. Shipe and his wife lived in Springfield for about 50 years, 30 of which were spent working with the Central Intelligence Agency. The couple moved to nearby Greenspring in December 2008.

Gray Parks, who also lives at Greenspring, was a classmate of Shipe’s at West Point. Parks marched in the 1949 inaugural parade with the second regiment, second battalion from West Point and also remembers the chilly weather that day and visiting Washington, D.C. via train.

“I was able to watch the rest of the ceremonies with my Dad after finishing my duty on the parade route that day.”

“I recall that we came down on a train and formed up rather early for the parade; we stood in ranks and waited quite a while,” said Parks. “However, we were among the first groups in the parade so many waited longer than we did.” Parks noted that he had another opportunity to see the president when he visited West Point upon his and Shipe’s graduation in 1952.

LIKE THE OTHER MEN, Parks lived locally for quite a while before moving to Greenspring just more than three years ago. Interestingly, however, none of the neighbors have attended another inauguration ceremony since Truman’s in 1949.

“The ceremonies have become too crowded now,” said Upp. They do, however, fondly remember their 1949 inaugural experiences. “I was able to watch the rest of the ceremonies with my dad after finishing my duty on the parade route that day,” said Upp.

Parks also remembers the excitement, saying it was a “thrill when we did ‘eyes right’ to see the president and other famous people in the reviewing stand.”