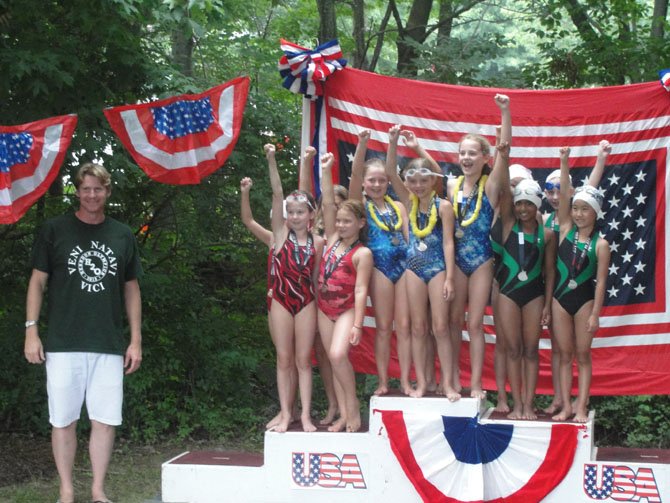 By By Sarah Anderson

Olympic gold medalist Josh Davis (right) stands with some of the participants of the 34th Annual Herndon Olympics swim meet.

The event began with an elaborate opening ceremony that included the swimming of the Olympic “torch” across the pool, a parade of teams, the playing of the national anthem and short speeches made by important guests. Mayor Lisa Merkel, Del. Tom Rust (R-86), and Olympics gold medalist Josh Davis were all present and gave words of encouragement to the swimmers. Josh Davis expressed that “dreams are made here. Champions are made here,” as he reminisced about his early swimming career that he began on a local summer league team. Davis stayed at the meet to take pictures and to hand out medals to the swimmers. Del. Rust later gave the swimmers the same advice that he used to give his own son when he competed in the Herndon Olympics: “Swim fast, leave no wake!”

Kerstin Severin, the Aquatic Services manager for the Town of Herndon and a coach for the Herndon Community Center swim team, has been in charge of organizing the Herndon Olympics for a number of years and spent many months preparing for this meet. She said that her favorite part of the Herndon Olympics is that for “the past few years we have been able to bring Olympians to this meet, which has been a great way to show the swimmers that even Olympic athletes started their careers in summer leagues. We give the children a chance to reach their goals and be the best that they can be.” 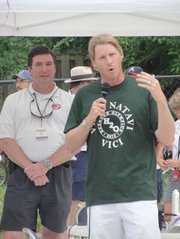 Arianna Chen, 16, doing a breaststroke open-turn during her race.

Coaches, friends and family all cheered on the children as they competed in individual races and relays. Ignat Miagkov, a swimmer on the Kingstream Kahunas, who won first place in the 11-12 Boys 50 Meter Freestyle, said that he enjoys “having his name announced and getting to swim against kids on a bunch of different teams at the Herndon Olympics.”

“I like the Herndon Olympics because it brings the whole community together for fast swimming, sportsmanship and lots of fun!” said Mary Elizabeth Caldwell, 19, who is a coach for Hunters Creek and had swum in the Herndon Olympics many times, herself. Many of the coaches, parents and spectators at the Herndon Olympics have been a part of the Herndon Swim League for years and continue to support it even when they are no longer swimming themselves.

Herndon’s swim season is drawing to a close, but there are still swim meets and events to look forward to in the coming weeks. The Herndon Swim League provides opportunities, like the Herndon Olympics, for young athletes to compete, make friends and become active participants in their community. 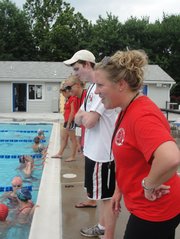 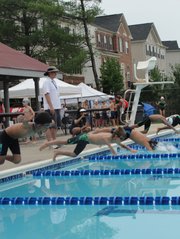 Alexander Jones, Liam Rayson, Rishad Malkani, Ethan McCrea—8 & Under Boys—take off from a dive to swim their 25 Meter Freestyle race.

Olympian Josh Davis, Mayor Lisa Merkel, and Del. Tom Rust (R-86) all spoke at the opening ceremony for the Herndon Olympics, urging the youth to do their best. 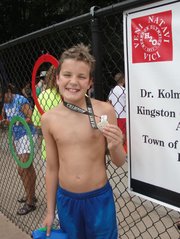 Swim Team Chairperson for Kingston Chase Pool Kelly Ginieczki assisted in the event’s program. She said, “I have been team representative for 10 years, and this is our fourth year hosting the Herndon Olympics. About 350 of the fastest swimmers from nine teams with pools located throughout Herndon attended this year and some records have been set this morning.”

“This is our 34th annual Herndon Olympics,” said event organizer Kerstin Severin. “It was first created in 1980 by Joe Smith, head coach of the Herndon High swim team at the time. It is a good opportunity for the kids and everybody to get some exercise. It was also a way for the swimmers in different leagues throughout Herndon to come together and compete before entering high school.”