NVSL Divisionals Lead to All Stars 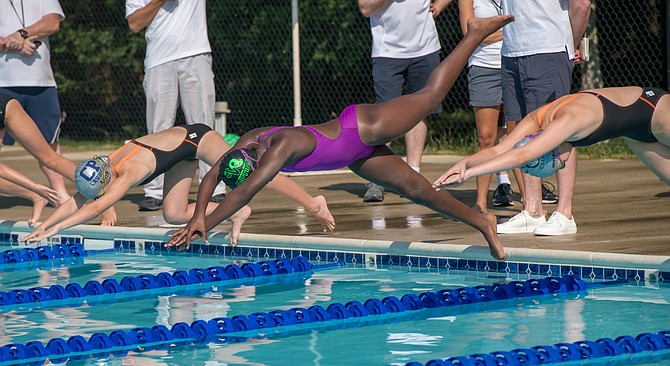 Charis Roundtree broke her own freestyle record at Divisionals and is seeded second in the event and third in backstroke at All Stars.

Sarah Boyle broke a team record in the Individual Medley and is seeded first in the event at All Stars.

Nicholas Harris placed first in butterfly and backstroke at Divisionals and is seeded second in both at All Stars.

The Virginia Run Riptide hosted the Northern Virginia Swim League Division Four swim meet, known as “Divisionals” on Saturday, resulting in 79 swimmers from across the division earning a spot to compete at the upcoming All Stars meet.

The Riptide will be sending eight swimmers to 11 events at All Stars. The meet on Saturday saw 47 Riptide swimmers earn 70 personal bests. Records across the division fell fast and often during the meet due to exceptional swimming and what was described as a “very fast pool.”

On the other end of the age groups, the Riptide’s 8 & Under swimmers will also be well represented at All Stars. Nicholas Harris broke his own 25 Meter Butterfly record of 17.49 by swimming for first place with a new record of 17.26; he also placed first in backstroke with a time of 19.95. His brother Tyler Harris, who is 6, swam in the same backstroke heat and beat his brother’s 6 & Under Backstroke record with a time of 22.80. Nicholas is seeded second in the butterfly and second in the backstroke at All Stars. Ethan O’Connor took home first place in the 8 & Under 25 Meter Freestyle with a new personal best time of 17.37 which means he is seeded ninth going into the event at All Stars. Ryan Garcia placed first in the 8 & Under 25 Meter Breaststroke with a new personal best of 23.96 making him the eighth seed in that event at All Stars.

Kevin O’Connor will represent the Boys 9-10 group in the 50 Meter Breaststroke at All Stars. He is seeded 10th in the event after taking third at Divisionals in an extremely close finish that saw four of the six swimmers in that heat making the cut time for All Stars.

The Riptide also won the Division Four Sportsmanship Award, the honor being awarded to the team who consistently demonstrates the elements of the NVSL Code of Conduct, displaying “Respect, courtesy, and good manners toward athletes, coaches, team representatives, and spectators.”

The Riptide celebrated their season with a banquet on Sunday and will return to the pool next spring for practices for the 2019 season.