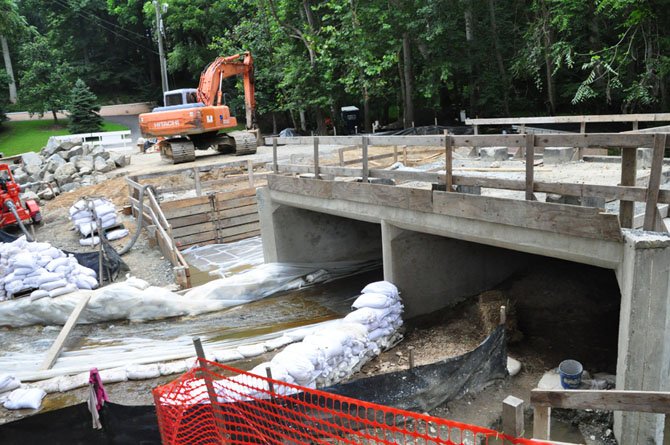 The replacement of the bridge at Beach Mill Road is almost halfway complete, and VDOT estimates it will be completed by late August. Photo by Alex McVeigh.

Great Falls — Replacement of the bridge on Beach Mill Road is one month into construction, and according to the Virginia Department of Transportation, it is proceeding according to schedule.

As of July 10, VDOT says construction is almost 49 percent complete. The steel piles for the bridge foundations are in place and reinforcement for the two abutment foundations are almost complete. Concrete was poured Friday, July 19.

The new structure will have a timber deck, and will be a single lane within the current right of way.

Nicholas Roper, an engineer with VDOT, says the new bridge is designed to last 50 to 75 years, and it has more capacity to handle high-water events than the old bridge, which was 40 percent undersized for a 10-year flood.

The original bridge from 1940 was washed out during severe storms in September 2011, and between then and this June, a temporary box culvert was installed.

The bridge was closed to traffic on June 19, with a marked detour leading drivers to Springvale Road, Utterback Store Road and Georgetown Pike.

"Every time I go the extra 10 minutes of the detour, I tell myself that after this summer, that bridge will be the one bridge in Great Falls that we won’t have to worry about being flooded," said Dawn Keating of Great Falls. "I’ve learned to limit my movements during heavy storm periods, particularly those crazy thunderstorms we tend to get in early June, so if this is a long-term solution, I’m all for it."

According to VDOT, the bridge carries about 1,700 cars per day.

Per the terms of VDOT’s contract, the bridge must have "substantial completion" by Tuesday, Aug. 30. After that date, the contractor will begin paying a fee for each day it is not completed.

VDOT currently estimates it will open by the end of August. The latest the bridge will open is Sept. 30, per the contract.