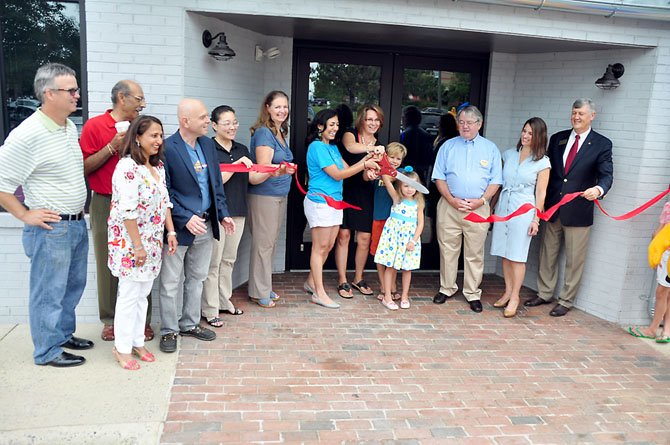 Herndon officials and members of the business community cut the ribbon on the Mellow Mushroom Monday, July 22. Photo by Alex McVeigh.

Herndon — Members of the Herndon Town Council and business community, not to mention those interested in a good pizza pie, were on hand for the opening of Mellow Mushroom Pizza Bakers on Elden Street Monday, July 22. The location, which is at the former Fuddrucker’s location, is the first in the Northern Virginia area. 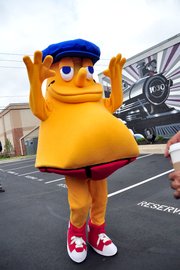 “I can’t think of a better place to get us started in Northern Virginia than Herndon,” said Pooja Mehta, owner of the location. “We tailor our locations to the communities we’re in, so with this location we chose a railroad theme, which is a nod to Herndon’s history, but we also added some more futuristic elements, and some ‘graffiti,’ which can usually be found at train stations.”

Mayor Lisa Merkel said she was excited to welcome a new restaurant to Herndon.

“We recently launched a new restaurant initiative, because we’re trying to make Herndon a destination for the area’s best restaurants,” she said. “This plays right into that. I think this is going to be a huge success.”

Mellow Mushroom’s signature is their pizza, and the base for their pizza is their dough, which is fresh made and hand tossed. They also have options for vegetarians, vegans and those on a gluten free diet.

“My personal favorite thing on the menu is the Red Skin Potato pizza,” Mehta said, referring to the pie with red potatoes, bacon, onions, cheddar, mozzarella, sour cream and ranch dressing. “It’s like a baked potato with a crust.” Other menu items include hoagies, calzones, salads and appetizers.

The interior of the new Mellow Mushroom in Herndon contains a railroad theme, to pay homage to Herndon’s history. The location opened Monday, July 22.

They will also have 29 beers on tap, as well as Abita root beer on tap. The selections include a variety of beers from around the country, including local breweries such as Ashburn’s Lost Rhino, Alexandria’s Port City and Washington, D.C.’s DC Brau.

Shae Dannemiller, general manager, as well as the cicerone, which is the beer version of a sommelier, says they aimed to get a wide variety of beers into the restaurant.

“We wanted to be well-rounded, to have a selection that will appeal to a lot of tastes,” he said. “We’ll see some rotations over time, depending on what’s selling and what people want to see.” Mellow Mushroom has a beer club, where members can get points for trying different beer types as they come in. Club rewards include special tastings, brewery tours and more.

“I’ve been to a Mellow Mushroom in Florida, and I’ve always remembered the pizza I had there, it had all sorts of different kinds of mushrooms, which are my favorite,” said Chuck Gonzalez of Herndon. “I heard about the opening a few weeks ago, and I wanted to make sure I got here for lunch. Hopefully it’s as good as I remember.”