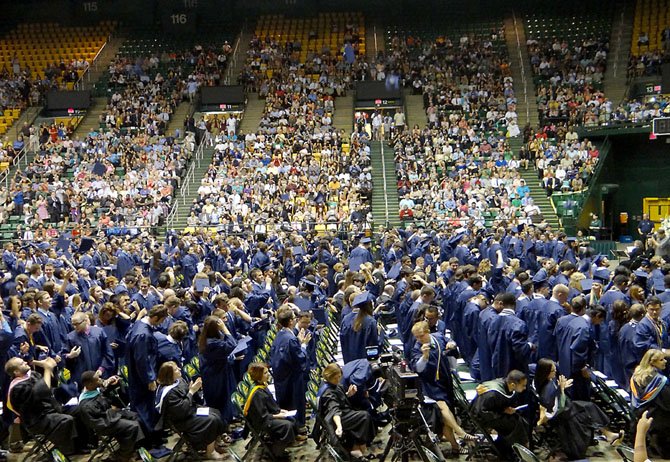 Graduates of South County High School’s Class of 2013 celebrate their commencement by throwing their caps in the air. Photo by Ashley Adams/The Connection

The Class of 2013 and South County High School’s faculty recognize one of 56 honor graduates during Monday’s commencement ceremony.

James An, Iris Ahn, Samuel Lee and Can Ly pose for pictures after their commencement ceremony. 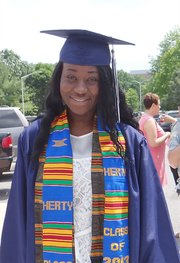 Henrietta Osardu “I don’t know where I’m going next, but I want to be a dentist. Ten years from now, I hope I’ll have a steady job.” 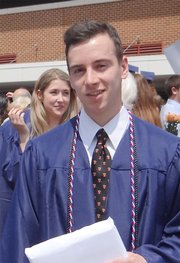 Josh Heinz “I’m going to NOVA in the fall. Eventually, I’d like to work for the United States Marines.”

Leon Harris, anchor of ABC-7 News, was the guest speaker at Monday’s ceremony. During his commencement address, he offered several pieces of advice to the Class of 2013.

“Get rid of anybody in your life who only tells you what you can’t do,” Harris said.

Instead, he urged graduates to seek out people who encourage their endeavors, celebrate their triumphs and offer support in times of adversity. Most important of all, Harris said, was to strive to be that kind of person toward others. 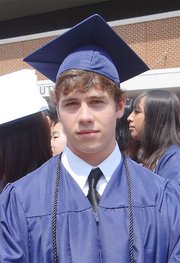 Kyle Webb “I’m going to Radford University. In 10 years, I see myself working at a gym or franchising.”

Harris also encouraged the Class of 2013 to continue to discover new strengths and passions.

“Never stop trying to see what else you’re good at,” Harris said.

Samantha Needham gave the honor graduate address. Needham, who was chosen by her honors peers to speak, highlighted the strong sense of community at South County. Unlike most of her classmates she did not grow up in the area, but upon arriving at South County, Needham said, “I felt like I’d been here my whole life.” 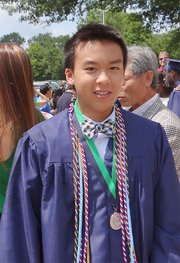 Nick Nguyen “I’m going to Virginia Tech after this because I want to be engineer. That’s where I hope I’ll be in 10 years.”

The principal’s award was presented to Keaton Tettelbach. During his time at South County, Tettlebach served as the Stallions for Service chairman, participated in student government and played varsity baseball for four years. Tettlebach will attend the United States Military Academy next fall. 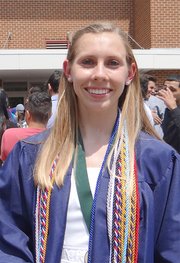 Mary Cate Scully “Next, I’ll be attending the United States Naval Academy. Hopefully, in 10 years I’ll be a doctor.”

Principal Dr. Jane Lipp, in her address, noted hard work as a defining characteristic of the Class of 2013. Their hard work, she said, was demonstrated both in the classroom and outside it in the form of extracurricular activities. Of these achievements, Lipp emphasized SOL and AP exam scores, charity fundraisers, athletic accomplishments and 2013’s 56 honor graduates.

“All of us can see the fruits of your labor today,” Lipp said.

It was Class President Eric Do who conveyed his fellow graduates’ achievements during their four-year journey the most succinctly. As he concluded his speech enumerating his peers’ accomplishments, as well as his confidence in their successful pursuit of future endeavors, he smiled at his classmates, decked out in navy blue graduation caps and gowns identical to his own.