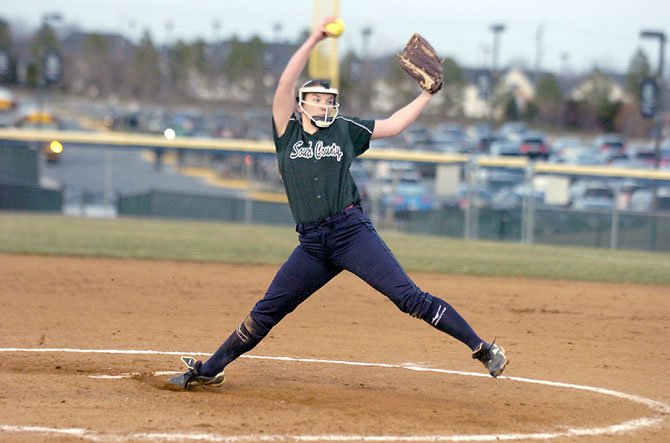 But while the Stallions have experienced sustained success, their last three seasons have ended in a fashion that has head coach Gary Dillow wanting more.

South County has lost in the Northern Region semifinals three straight years. Each time, the Stallions failed to score a single run and went home one win shy of the state tournament. Dillow said recently the team needs to improve its hitting against quality pitching in order to advance further in the region tournament.

Whether South County finds a way to get it done at regionals will be determined in late May. On Friday, the Stallions got an early start on coming up with clutch hits.

South County defeated the Oakton Cougars 4-0 in its season opener on March 15 at South County High School. In the fourth inning, junior catcher Haylea Geer gave South County a 1-0 lead it wouldn’t relinquish with an RBI double. In the bottom of the fifth, freshman leadoff hitter Jade Williams gave the Stallions some insurance with an opposite-field three-run triple to right.

South County will be looking for the same kind of hits in the postseason.

"We’ve been to the regional semifinals three years in a row and lost," Dillow said. "That really is our focus, to take that next step and get to the regional finals and qualify for states. I think we need to hit better, more consistently against really good pitching."

"We’ve been to the regional semifinals three years in a row and lost. That really is our focus, to take that next step and get to the regional finals and qualify for states."

On Friday, the hitting started with junior shortstop Whitney Burks, whose two-out single up the middle set up South County’s first run. Burks, who is verbally committed to Stanford, stole second base and later scored when Geer smoked a double to deep left field.

"[Burks] makes everything go," Dillow said. "… Even when she gets out, she hits the ball hard. She’s one of the best players in the region and the state right now."

Williams, a freshman outfielder for the Stallions, came through with a bases-clearing triple in the fifth inning.

"I was nervous," Williams said about playing in her first varsity game. "I’ve been playing since I was 5, so it should be second-nature to me, but I was nervous."

Dillow has confidence Williams can produce at the top of the order.

"Crazy coach sticking a freshman in the leadoff spot," Dillow said, "but she’s … playing really high-level travel and hits the ball well, so I knew she could do it."

Four runs was more than enough offense for junior pitcher Rebecca Martin, who earned the victory in the circle. The third-year varsity hurler surrendered two hits and walked two while striking out 11 in six shutout innings.

"As a freshman, the main thing that I needed to work on was my consistency, so I feel like I’m better at keeping it in the zone and hitting spots," Martin said. "I feel like I’m more consistent and have more confidence."

Dillow had a similar assessment.

South County will travel to face T.C. Williams at 6:30 p.m. today. The Stallions will compete in a tournament in Myrtle Beach, S.C., March 25-27 and will return to local action at home against Lake Braddock on April 3.