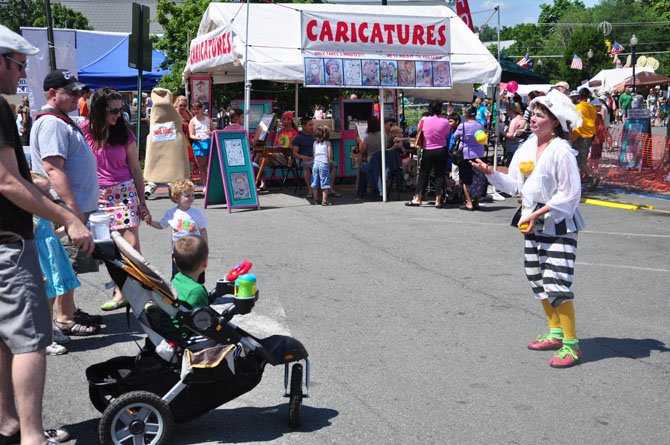 Wandering live acts, including clowns and a monkey trainer, will be around the Herndon Festival this year, which starts Thursday, May 30. Photo by Alex McVeigh.

Herndon — Whether it’s downtown or the surrounding areas, there’s plenty of summer fun to be had in Herndon. Though it takes place a few weeks before the official start of summer, this weekend’s Herndon festival marks the start of the season for many.

“Between live music on the town green, the carnival rides and the fireworks, it’s hard to get more summery than the Herndon Festival,” said Ivan Tyler of Herndon. “Try explaining that to my kids though, they still have a few weeks of school left.”

Arrowbrook Park will host three concerts this summer, each featuring a pop music group as well as an ensemble from a branch of the armed forces. All concerts will be at the park, 2351 Field Point Road, Herndon, from 6 p.m. to 9 p.m.

*Saturday, July 20—Leonard, Coleman and Blunt, three former lead singers of The Temptations, The Platters and The Drifters and The U.S. Air Force “Singing Sergeants,” the official chorale of the Air Force.

The four-day festival is one of the largest in the area, and will have activities for visitors of all ages. The municipal parking lot will be transformed into a carnival midway with rides and other activities, while the area along the W and OD Trail will feature games and prizes.

The town green behind the municipal center, as well as two other stages at the festival, will feature a variety of acts ranging form local hip-hop artist Bo Jankans to the tropical sounds of Pan Fried Steel.

“I’ve always liked the diversity of music at the festival, and the fact that there’s always someone playing somewhere is one of the best parts of the event,” said Stephanie Morgan of Sterling. “Even the kinds of music I wouldn’t necessarily buy on CD translates very well to the whole live atmosphere, it’s easy to just stop by one of the stages for a few minutes and have some fun.”

The season will also see the beginning of a new concert series at nearby Arrowhead Park. Each show will feature a pop music act, followed by an ensemble from a branch of the Armed Forces.

“As soon as I came to this park, I thought it would be a cool venue for a concert,” said Pat Dupree, whose daughter plays soccer at Arrowbrook. “It’s new and modern looking and has a nice vibe to it. I can’t wait to see what the turnout is going to be.”

Pat McGee, a native of Annandale and front man for the national touring act the Pat McGee Band, will perform in the inaugural concert. McGee will perform a solo acoustic set, to be followed by the U.S. Army Field Band “The Volunteers,” who will tell the Army story through rock, pop, country and patriotic music.

The monthly concerts are a joint effort between the Fairfax County Park Authority, Arrowbrook Management Corporation, Arrowbrook Centre, LLC and the Ruth and Hal Launders Charitable Trust. The 23-acre park opened in 2010.