Suits and Sneakers Goes On
Votes

Suits and Sneakers Goes On

Annual awards relocated to McLean Community Center due to shutdown. 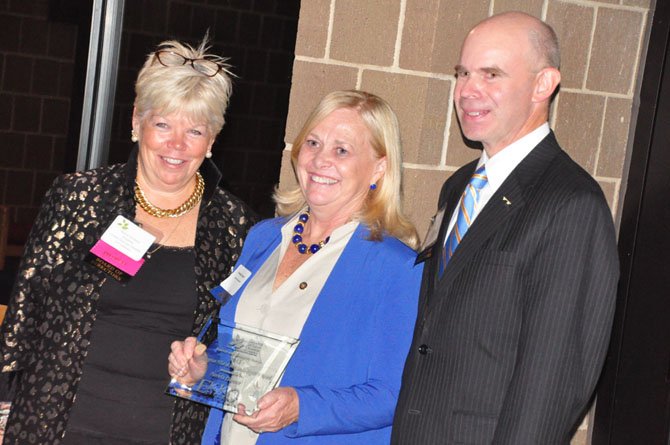 From left, Marcia Twomey, president of the Greater McLean Chamber of Commerce, Pamela Danner and John Brough, chair of the chamber board. Danner was awarded the Mary Kingman Pillar of McLean Recognition Award Tuesday, Oct. 1. Photo by Alex McVeigh.

And the Winners Are...

The following is a list of winners of the Greater McLean Chamber of Commerce Business and Community Awards.

Restaurant of the Year: Tachibana

Retailer of the Year: Goeller’s Art and Office Supplies

McLean — In the early afternoon hours of Tuesday, Oct. 1, Greater McLean Chamber of Commerce staff was busy setting up for the annual Suits and Sneakers event, to be held that evening at Claude Moore Colonial Farm. That is, until park police arrived and informed them that the park was closed due to the shutdown of the federal government.

“I got a call from [chamber President] Marcia Twomey around 1:30 this afternoon, and she was at the pavilions at Turkey Run at Claude Moore Farm, where she had been all day Sunday and all day today, along with a few other people, and said the park police just showed up, and they’re shutting us down,” said John Brough, chairman of the chamber’s board. “Marcia was cool and calm under pressure, and Peg Jarman, who was going to be our host tonight, the two of them didn’t bat an eye.”

Soon after that George Sachs, executive director of the McLean Community Center, got a call about the facility’s availability for the evening.

“They needed space for about 50 tables, as well as a few other pieces, so we opened up the community room and fit what we could in there, and put the rest out in the courtyard,” he said. “We were scrambling for most of the afternoon, but we’re happy we could accommodate the chamber. That’s part of being the community center.”

THE ANNUAL SUITS AND SNEAKERS GALA features the chamber’s annual Business and Community Awards. Twelve individuals, nine businesses and one nonprofit were given awards.

Tramell, who has been a firefighter for 20 years, has been with the McLean Fire Station 401 for seven years. On March 6, he was off duty and witnessed a traffic accident in Prince George’s County. After stopping at the scene and telling his daughter, who was traveling with him, to call 911, he approached the car.

Immediately noticing the car was on fire and the driver was not getting out, he smashed the driver’s side window with a rock and removed the driver from the vehicle and carried the victim to safety.

Pamela Danner and Tom Mangan were awarded the Mar Kingman Pillar of McLean recognition. Kingman was a longtime McLean resident who served as commander of American Legion Post 270 in McLean, as president of the Women’s Club of McLean and the McLean chapter of the American Association of Retired Persons.

“I’m so honored to receive a recognition that bears Mary’s name, she was a very close friend of mine,” Danner said. “I know she would be happy.”

This year saw the creation of the Mark C. Lowham Community Engagement Excellence Award. Lowham is a managing partner with TTR Sotheby’s International Realty, as well as a member of the Board of Trustees for The Potomac School and commissioner of the Fairfax County Economic Development Authority.

THE INAUGURAL AWARD went to Rick Makely, the manager of the McLean Giant.

"His dedication is evident by the fact that the McLean Giant leads all the Ahold USA supermarkets in annual sales. That enthusiasm carries over to his work with the chamber. He is always willing to step up when asked,” said Marcus Simon, first vice chairman of the chamber. “Rick believes that giving back is one of the key roles Giants plays in our community and he does just that by holding food drives for Share, Inc., supporting chamber events and providing valet services for his customers.”

Makely said being a member of the Greater McLean Chamber of Commerce has been a win-win for him.

“Being a chamber member has provided us with endless opportunities to give back to the community through volunteerism and participation. The relationships and support we have received from the community since joining the chamber has allowed Giant to continue to grow our business by more than 20 percent,” he said. “Being good at what you do doesn’t matter if people don’t know what you’re doing. Being part of this chamber has made that happen for us.”