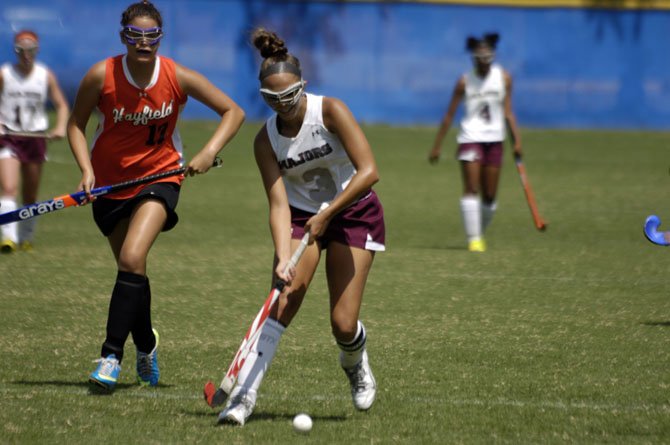 Senior midfielder and team captain Amber Sable is one of the more experienced players on the 2014 Mount Vernon field hockey player. Photo by Craig Sterbutzel.

After years as a perennial district title contender, the Mount Vernon field hockey team struggled through a rebuilding season in 2013.

On Monday, the Majors entered the 2014 Under the Lights tournament at Lee High School with hopes of an improved performance during the year. After two days and four games, Mount Vernon remained undefeated.

“Overall, we’re very happy,” Mount Vernon assistant coach Kelsey Otersen said. “We had very specific focuses at practice that we asked these girls to implement in the game and they did exactly what was asked and that’s what we attribute our success to.

“… We’re very optimistic about what we’ll accomplish this year. We have pretty much the same team coming back and we have a couple new girls that we brought up that bring a lot to our team.”

Junior forward Nicole Simmons had an assist against Annandale.

Senior midfielder Amber Sable is one of four team captains, along with Heltzel, Gardiner and junior forward/midfielder Jessica Miller. Sable was one of two returning starters on last year’s team and expects improvement this season.

“Going through that was hard, but we knew last year was going to be a rebuilding year,” Sable said. “We knew once we got experience we were going to be a lot better than we were last year, so we should be pretty good this year.”