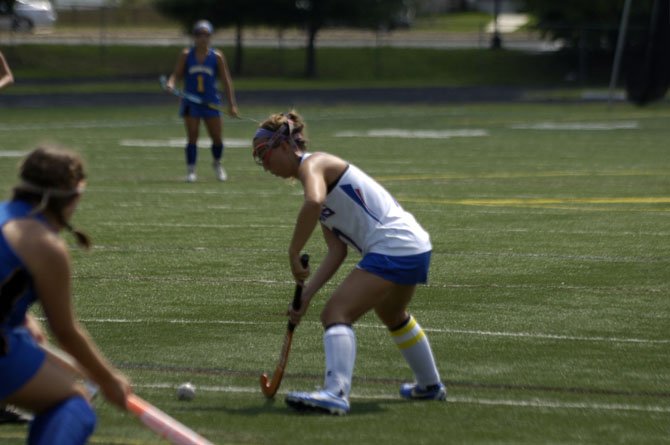 Head coach William Heresniak led the T.C. Williams field hockey team to a 3-0-1 record and a Pool C championship during the two-day Under the Lights tournament, Aug. 25-26 at Lee High School

Following the T.C. Williams field hockey team’s fourth and final game of the Under the Lights tournament at Lee High School on Tuesday, Aug. 26, head coach William Heresniak praised the two-day event and what it offers from a team-building standpoint.

“This whole tournament is fun,” Heresniak said Tuesday. “You’ve got two days, you get four games, but [during] the in-between time, the down time, the kids can jell, the kids can form a whole family. … For us every year, it’s awesome to come here because we can establish that early.”

While the Titans bonded off the field, they also found the time to take care of business on it.

T.C. Williams went undefeated during tournament action and won the Pool C championship. The Titans finished 3-0-1 and did not allow a goal in four games. T.C. played its first three games (all victories) without seven players, including five starters, who were attending a leadership conference, according to Heresniak.

On Monday, T.C. Williams defeated Annandale, 3-0, and Hayfield, 5-0. The following day, the Titans beat Osbourn Park, 2-0, and played to a scoreless tie with Oakton.

“The wins, it just gets the snowball rolling,” said Heresniak, explaining the effect tournament success has on the rest of the season.

“The wins, it just gets the snowball rolling.”

“I can attribute the defense to Philomena Fitzgerald, who is one of our defensive mids,” Heresniak said. “She was just solid the whole time. We only played three in the back and she was right in the middle. She took care of stuff that came through, she possessed the ball on steals coming through, distributed up front, she was the reason [behind our strong defensive effort].

“… Each team that we played put a couple shots on us, but my goalkeeper, Sarah Leckman, she was solid in goal. I couldn’t ask for better [performance from] both for [them].”

Battlefield won Pool A with a 3-0-1 record. Robinson went 4-0 and captured the Pool B championship.