Fairfax County Board of Supervisors Signs On for $403 Million Loan 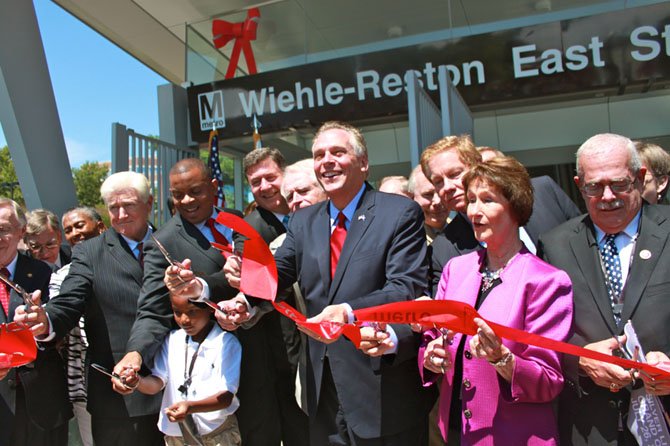 Local, state and national officials at the ribbon-cutting ceremony for the Silver Line on Saturday. Photo by Reena Singh.

Phase two of the Silver Line construction got a boost towards its 2018 estimated completion date. After nearly a year of discussion, the Fairfax County Board of Supervisors voted unanimously to authorize a federal loan agreement to the tune of $403 million.

The low-interest allowance under the Transportation Infrastructure Finance and Innovation Act (TIFIA) would be good for almost half of the estimated $915 million Fairfax County is on board to contribute to the massive rail project.

“The Silver Line is vital to the economic growth of Fairfax County, the region and the Commonwealth,” said Chairman Sharon Bulova in a statement, “and I am proud of the work we’ve done to make it a reality.”

Prior to the vote, Bulova added, “there’s been lot of discussion about this over the last year or so. It’s pretty thoroughly vetted and it’s a really important step we’re taking.”

Supervisor Pat Herrity (R-Springfield) supported the measure, but was quick with a reminder that the funds aren’t exactly free money. “It's a loan, money that's got to be paid back, and it's going to be paid by the toll payers,” he said. “So eventually the tolls will rise, but we forestalled that for a period of time, which is good news for the corridor.”

Herrity was referring to Dulles Toll Road, where drivers escaped immediate hikes but will eventually see higher tolls to assist as the county begins to repay the loan, anticipated for the year 2023.

Supervisor Jeff McKay (D-Lee) played up the importance of seizing the loan opportunity.

“Any time you can get a low interest federal loan to support infrastructure, that allows you to maximize your dollars and potentially reduce the cost of the overall project by millions,” said McKay. “It was a great opportunity for us; very few jurisdictions under the TIFIA regulations could qualify for this, so we would be foolish to have not taken advantage of it.”

The loan to Fairfax County comes in conjunction with federal Department of Transportation loans to Silver Line partners Loudoun County and the Metropolitan Washington Airports Authority, as the trio works to finance the entire $5.6 billion project.