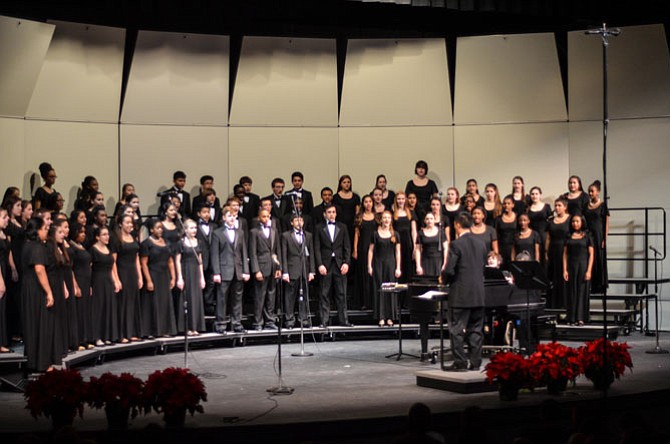 Reston’s South Lakes High School choral department presented their free winter concert “Sounds of the Season” at the school auditorium on Dec. 11. Music preformed included both sacred and secular selection, and was an opportunity for family members and friends to hear the results of many hours of practice and rehearsal. “I am so proud of the amazing work our choral arts students perform,” said South Lakes Principal Kim Retzer. “The concert Thursday night showcased the amazing talents of our students. Ms. Gigliotti continues to challenge them to perform musically complex pieces.”

The evening began with student-directed a capella ensembles. Songs in the show included gospel spiritual “Go Where I Send Thee!” sung by the Women’s Chorale and “Santa Baby” by the Ladies A Capella Ensemble, the DoReMigas. The South Lakes Men’s Camerata performed songs including Ukranian folk tune “Sleigh Bells” and “Rockin’ Around the Christmas Tree.” Anthony Khong, who graduated this December with a degree in Music Education from James Madison University directed the men’s and women’s choir group in the first part of the show.

Khong, who previously studied at Woodson High School, took the opportunity to teach music to the students at South Lakes High School (SLHS) for the past several months. While on the stage before intermission, Khong expressed his appreciation for the experience. “I want to thank everyone at South Lakes High School for an amazing eight weeks,” said Khong. Many of the students expressed appreciation for Khong’s teaching style. “He was a really good teacher,” said SLHS freshman Mackenzie Moy. “We got to have fun and yet be productive at the same time.” 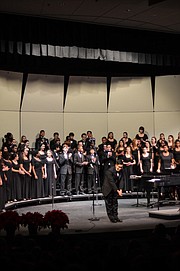 While working as a student director at SLHS, Khong assisted SLHS choir director Rita Gigliotti. Gigliotti praised Khong’s work at South Lakes, and presented him with a thank--you card signed by the students. After the intermission, the program continued with music by the Chamber Singers and the advanced women’s singers group, Bella Voce. Gigliotti joined the SLHS faculty in 2005 and both students and parents have been very receptive to school chorus program. “It is always amazing watching them put it all together, they work so hard,” said parent Heather Young, whose two daughters Kellye and Madeline sing in the choir.

THE SOUTH LAKES CHORAL ARTS PROGRAM will continue into 2015 with the annual Broadway Night concerts in January. Performances will include participation of about 100 feeder elementary and middle school students in addition to 100 South Lakes students. There will be three shows: Friday, Jan. 23 at 7 p.m., Saturday, Jan. 24 at 3 p.m. and 7 p.m.. Tickets will go on sale in early January.

On March 6-8, South Lakes HS will again host the annual SingStrong DC event, a weekend full of a capella music and educational opportunities for students and the community. The festival includes concerts, competitions, and two days of master classes from musicians from around the country. The event is hosted at SLHS because Gigliotti has been on the SingStrong team since the origin of the organization. Proceeds from the event support the South Lakes HS Choral Department and Alzheimer's Organization. Tickets are on sale now.

Parents and attendees applauded the December winter concert performance. “I love the mix of music with both holiday and winter songs,” said parent Laurie Moy.

ON DEC. 18 at 7 p.m., the South Lakes Band and Orchestra programs will perform their winter concerts, both of which are free and open to the public. For more information about events check out the calendar on the website www.fcps.edu/SouthLakesHS.