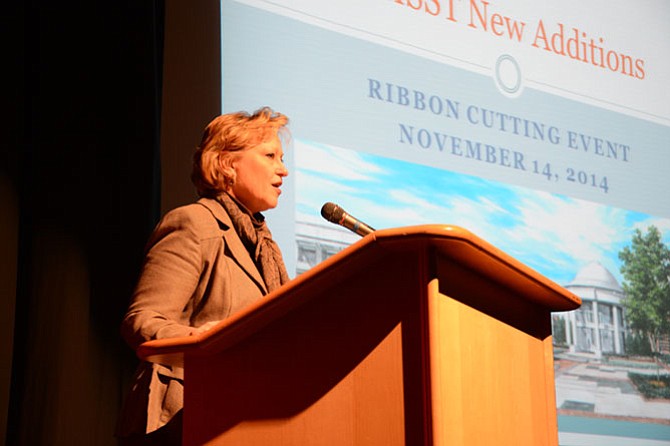 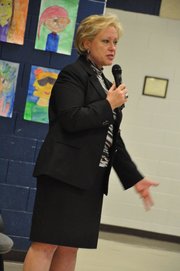 Karen Garza is a good listener. And once she’s listened, she is, admittedly, not very patient.

“If there's a real issue, I don't think it has to be debated for 10 or 15 years,” Garza said in an interview. “Either we're going to do something about it or not.”

In May and June 2014, less than 12 months after taking the helm as superintendent of Fairfax County Public Schools, Garza and her staff hosted eight community meetings on the topic of later start times for high schools. According to FCPS, 1,000 people participated in person, another 2,000 weighed in online.

By October, the School Board voted in favor of changing the start times, something it had been considering for years but never pushed forward. For the 2015-2016 school year, all county high schools will start classes between 8 a.m. and 8:10 a.m.

Another entrenched issue: moving from half-day Mondays at elementary schools to full-days. The half-day weekly teacher work period dated back to the 1970s.

“Once we identified we really have an issue here, we don't have enough time built into our elementary schedules, I met with the team and I said, ‘Can we get this done?’” said Garza. “These are the reasons why we need to change it, our timeline is aggressive, but can we get it done? And they said, ‘Yes we can.’”

The School Board broke with 40 years of half-day Mondays with a vote in June 2014. The change went into effect at the beginning of September.

“She looked at these with a new eye and was very eager to move on them,” said Ryan McElveen, an at-large School Board member who was part of the group that hired Garza, “so we could get on with dealing with other issues.”

McElveen said Garza’s face-time at additional “listening tours,” meetings she’s been hosting around the county since she came to Fairfax from Lubbock, Texas in July 2013, have helped re-establish critical community ties.

Superintendent Karen Garza shares a moment with Debbie Kilpatrick, president of Fairfax County Council of PTAs at the Listening Tour on Dec. 6.

“Under the previous superintendent,” McElveen said, “there were perceptions the board and the central office had precipitously been removed from the viewpoint and perspective of the community. That was key in our hiring of Karen. We were looking for someone who could bring the community back into the fold.”

FORMER FCPS Superintendent Daniel Domenech still lives in Fairfax County, and his perspective differs somewhat from McElveen. “It didn’t seem to me there was a distance with [Garza’s predecessor] Jack Dale,” he said. “I always felt that Fairfax as a school system was very responsive to the community, very much in tune with what’s going on.”

The two men agree that community involvement is crucial to moving the school system forward. In a county of over 180,000 students that’s growing by 17 a day (according to Garza), that’s a lot of parents with a lot of voices to listen to.

Debbie Kilpatrick, vice president of membership with Virginia PTA, is impressed so far with Garza being “inclusive” and having “contagious high energy.”

“She has a schedule not many people could keep up with and she really doesn’t say no to anyone who wants her time,” said Kilpatrick. “On the contrary, she says, ‘No, I want to listen.’”

Tina Hone, a School Board member from 2007 to 2011 and founder of the advocacy group Coalition of the Silence, disagreed with Garza over her first budget proposal for the county.

“We had a little crossing of swords,” said Hone. “What I really respect about Karen: I publicly made a statement, then she called me. I looked at the phone, pulled it away from my head and looked at it again. I was blown away by that.”

The Road to Fairfax County

Hone sees Garza in stark contrast to previous FCPS leadership that exhibited “very much an effort to control rather than respond.” She cited the controversial closing of Clifton Elementary School in June 2011, when she said the board did little to consult with the public first.

“There was this sense there were members of the School Board who said they don’t want to meet with people who disagreed with them,” she said.

“It takes courage to be a problem-solver,” Hone continued, “to try to turn the ship against the tide, with courage and grace to get this stuff done.”

That courage, grace and increased input from the community are helping Garza get traction on the issues she prioritizes with the School Board, still in its honeymoon phase with Garza.

“We are all happy with her, the board members,” said at-large member Ilryong Moon. “I can say that with confidence. We made a right decision bringing her to Fairfax. She’s been helping the members to look at issues in a certain perspective that we otherwise wouldn’t have an opportunity to take advantage of.”

BUT GARZA is not a one-woman show, and she attributes her accomplishments in part to the cabinet and administrative structure she realigned within her first year. Unlike most new superintendents, Garza brought zero staff with her from the Lone Star State. Instead, she spent her first fall and winter assessing the team she inherited, before re-organizing in the spring.

Garza nixed the old eight-cluster administration group in favor of five regions and split the department of Professional Learning and Accountability roles among other departments. This eliminated five staff positions and saved $637,000, according to John Torre, public information officer for the schools. 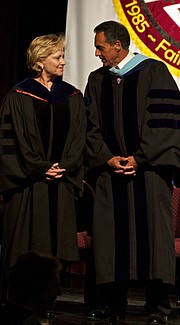 “It's my view that to better align a large system, you have to narrow the number of people at the highest levels making the decisions,” Garza said. “I can create stronger, better alignment with five people than I can with eight people.”

One of Garza’s hires was Marty Smith as chief of staff, to whom she delegated the lead role on full-day Mondays. Smith was previously the superintendent of Cluster 1.

“He understands and knows the system,” said Garza. “He knows the players, the right people to bring to the table to get it done. And he's a good listener, which I appreciate.”

“The biggest thing with Dr Garza is trust,” said Smith. “She places a lot in the individuals who work for her. While I carried out her vision, she was able to really build consensus with the board in terms of an individual approach. She did much of the same with teacher and principal associations.”

Even with a streamlined and realigned support team, “Obviously Dr. Garza is the CEO for them to execute the vision,” said Moon. To be a passionate captain of the ship, Garza is motivated by her lifelong love of schools and learning. She started her career as an elementary school teacher, aspiring to be like her father, a college English professor.

“I love being in classrooms, and I'm amazed at how gifted our students are,” said Garza. “I'm very mindful of the fact that we have such an opportunity for a positive impact on students' lives. I try to never lose sight of the fact not only are you setting students up for success at that next level, but in many cases making a memory. Make it a positive one.”

Hone said the teacher in Garza is apparent and one key to her current success. “Everything she does, it’s how a teacher approaches things,” Hone said. “It’s clear, explained, pulling people in instead of telling them what to do. That dictatorship thing doesn’t work. There’s always someone running a rebellion.”

Garza will be tested when she and the board tackle the $63.9 million deficit she projected for FY2016 — and it gets worse in FY2017.

“She is such a good diplomat and everyone likes her,” said Fairfax County Federation of Teachers President Steven Greenburg. “But there is an expectation on the part of some stakeholders that she will generate revenue and hold county or state officials accountable for the decisions they take. The only thing that would limit what she wants to accomplish is lack of funds.”

If she can manage the funds, Garza has a Texas-sized list of goals for the county. Among them are making the compensation for teachers more competitive with nearby jurisdictions, developing a strategic plan for redesigning the curriculum to be more project- and problem solving-based, reducing class size, bringing technology to more students and doubling the availability of Pre-Kindergarten to qualifying students.

To address the funding, another priority is mobilizing support from businesses in the school system’s communities. Garza said the Foundation for Fairfax County Public Schools, under executive director Mike Infurnari, will drive support from that relatively untapped resource.

“I'm hoping we're able to garner a lot more support from our business community,” she said, “at least in those areas that can help us be more innovative with technology education.”

Click here for a related story on Superintendent Garza's previous achievements in Texas.

Click here for a related story on how schools can get help from the community.