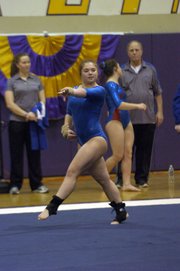 T.C. Williams senior Holland Cathey qualified for states in two events, but the Titans failed to qualify as a team during the 6A North region gymnastics meet on Feb. 18 at Lake Braddock.

T.C. Williams senior Holland Cathey entered the 6A North region gymnastics meet on Feb. 18 as one of the top competitors in the area, but it was evident during the first two rotations that this would not be one of her best performances.

Cathey, the Conference 7 all-around champion, fell twice during her beam performance. During the next rotation, she fell during her floor routine. Later, she landed on her head while warming up for vault.

While embarrassment or frustration could have consumed Cathey following her vault mishap, she instead responded with a championship-worthy effort.

After a rough warm-up, Cathey produced a first-place score of 9.775 on vault and finished fourth on bars with a score of 9.283, earning the senior a trip to states in both events.

As a team, T.C. Williams followed Cathey’s path. The Titans finished third out of six teams on beam and third on floor, but responded with a second-place effort on vault and the top score on bars.

“The first two events were rough, [but] we actually pulled it off really well on the last two events,” Cathey said. “I think that’s representative of our season a little bit. The beg was a little bit rough, couldn’t get it together, and then at the end we sort of pulled it together.”

While Cathey won an individual region championship and will compete at states, the Titans’ season as a team ended Tuesday night. The top two teams secure state berths, but T.C. Williams placed third with a score of 138.459. Washington-Lee won its third consecutive region title with a score of 140.449. McLean finished runner-up for the third straight year with a total of 140.077.

“They put,” T.C. Williams coach Pete Novgrod said, “a little too much pressure on themselves.”

T.C. Williams entered the 2013-14 season with the possibility of competing with its first full team since the early 1980s. Four gymnasts are required to produce a team score and the Titans had exactly that many gymnasts on the roster --- Cathey, juniors Grace Girard and Jordan Mambert, and freshman Cailyn Lager. Early in the season, however, injuries and other commitments kept all four Titans from competing at the same meet. T.C. Williams eventually competed together on Jan. 25 during the Barbara Reinwald W-L Gymnastics Invitational. On Jan. 31, the Titans won the Conference 7 championship with a score of 143.45. Cathey won the all-around title with a score of 37.55.

”The first two events were rough, [but] we actually pulled it off really well on the last two events. I think that’s representative of our season a little bit: the beginning was a little bit rough, couldn’t get it together, and then at the end we sort of pulled it together.”

While T.C. Williams’ season came to a close, the Titans will lose just one of four members to graduation and could have some others joining next season.

“Definitely mixed emotions,” Cathey said after the meet. “[I’m] sad that the season is over [from a team standpoint]. I’m a senior, so I won’t be back next year, but I think we already have at least two girls lined up for next year, so they’ll have a full team again and I’m definitely going to come and watch and I’m excited for all of that. I wish them all the best.”