May form committee to decide what type would be best.

After serving on the Vienna Town Council, M. Jane Seeman was Vienna’s mayor for 14 years until her death from lung cancer on Feb. 23. She was beloved by family, friends and colleagues and Town residents.

So now, the Town Council members are considering the best way to honor her memory, and they want whatever they do to be both lasting and fitting. So during a June 9 work session, they considered the possibilities.

“It’s something people are talking about,” said Town Manager Mercury Payton. “Does the Town Council want to do a memorial?” 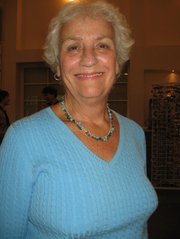 Vienna Mayor Jane Seeman when she announced her retirement in January.

“When I was interim mayor, lots of people came to me asking how they could help,” said Vice-Mayor Carey Sienicki. “Because Mayor Seeman was such a wonderful person, good leader and so entrenched in her community, there’s been a huge outpouring. And she was important regionally, too, so I feel it’s important to have a memorial to her.”

Councilwoman Laurie Cole asked the others, “Do we want this to be a Town project, or could there be multiple things? And who spearheads and funds it?”

Mayor Laurie DiRocco said it’s important to memorialize Seeman because “she served as mayor, councilwoman and on many committees for several years. We could do something with the businesses, residents, civic organizations and churches – who all want to do something – and we should channel that into one thing.”

Agreeing, Town attorney Steve Briglia said he liked the idea of partnering with those entities on the project. And Carole Wolfand, chairman of the Vienna Business Assn. Board of Directors, said an informal plan has actually been in the works for awhile.

She said the business she owns, Vienna Paint & Decorating, ran a promotion to raise money to enhance something within the Town that everyone could enjoy. The effort yielded $8,600.

“As Jane became more ill, I gave her the check so that, if we decided to do something, the money’s already there,” said Wolfand. “Jane, her daughter [Linda Colbert] and I talked about doing a memorial to her in the town.”

“A group of us chatted about public art and Jane’s visions of the Town green,” continued Wolfand. “I think the best idea is to involve the Town and its residents – and have some cohesiveness between the two – because that’s what Jane was all about.”

Postnet owner James Cudney said he’d like “to build an identity in Vienna and come up with initiatives and projects to create public art in the Town.”

“I pushed for public art in the Maple Avenue vision and Jane supported it, as well,” added Councilwoman Edythe Kelleher. “Linda Sullivan of the Fairfax County Arts Council met and spoke with people about it and has their ideas.”

Wolfand then said the Council should hear Sullivan’s presentation about what can be done with public art. Cudney noted that it “would probably take a year to have a group vet different artists and see what we want to do.”

“We have to decide what kind of memorial we want and if it’ll be art or something else,” said DiRocco. Cole said they’ll also have to determine whether fundraising will be needed.

Cudney suggested that businesses could make donations specifically for the memorial to the Town. And DiRocco said a committee should be created “to look at the [memorial] options and vet the artists.”

“It should be a combination of the Town, businesses and residents,” said Wolfand. “But how do you find the right group and number of people?”

Cole said the mayor could name an advisory committee of five or six people, and Councilman Howard Springsteen said this committee could then come back with a memorial recommendation.

Noting that the Town Council only has two summer meetings, July 7 and Aug. 18, DiRocco said the proposal to form a mayor’s advisory committee could be placed on one of those two agendas.