Evidence of the long-lasting effects of kindness to others in daily life. 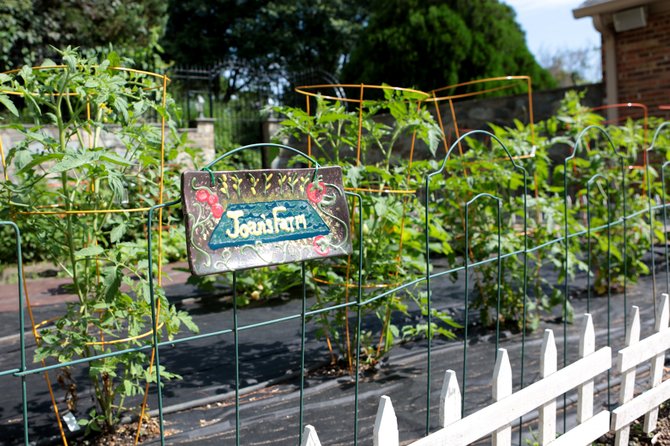 Joan’s Garden, created by filling in the former swimming pool.

A foster child alumni recently told me that what helps her to keep moving forward are the happy memories she has stored in her heart. Curious, I asked if she would share a few with me.

Each of her examples represented a time that someone was simply kind to her. And her list, after 22 years in and out of foster care, is depressingly short.

Last Sunday, I was doing some early evening weeding, when my beagles started barking like crazy. I looked up to see a man peering through my garden gate.

I didn’t recognize this older, mustachioed gentleman in his shorts and t-shirt. And I guess I should have been a little nervous as he brazenly walked through the gate.

But ever since we filled in our swimming pool to plant vegetables and berries, we get the occasional looky-loo, interested to see the pool-turned-garden.

He seemed friendly enough calling out a warm greeting as he approached. He said he had been wanting to come by and see me as I “had always been so nice to him.”

I wracked my brain, trying to recall this man who seemed so familiar with my dogs, my garden and me.

“Whenever I have seen you over the past years, you always asked about my wife. I wanted you to know,” he said, voice shaking, “that she died.”

In that moment, I realized that this is a man I have known for many years. A man I didn’t recognize without his PETRO uniform. A man whose name, I could not come up with, without the helpful stitching that adorns his work shirt.

We met, he and I, just after my husband and I moved into our house, over 13 years ago. Concerned about the potential environmental hazard our in-ground oil tank presented, we decided to remove it.

There was a bit of drama during the removal process when the backhoe severed the main power line into the house (a bit of a utility-marking snafu).

The fairly large explosion was followed by a realization that we had knocked out the electricity. The guys couldn’t continue until the Fire Marshal arrived and I couldn’t work until electricity was restored. So, the group of us (two from PETRO, Fred-the-Beagle and I) bonded over pizza and the long wait for the Fire Marshal and Dominion Power to arrive.

I think it was then that he told me about his wife’s illness. We didn’t speak every time he came to fill our new oil tank. But occasionally we would see each other, exchange a few pleasantries, and I would ask about his wife. There were ups and downs over the years, but mostly downs.

We both cried a little, as he told me that she had passed last month. And that it was very hard. While he does have friends, every night he returns to an empty house. He didn’t want to have a drink. He didn’t want to sit for a while. He just wanted me to know.

As he walked slowly to his car, head bowed, I turned back to my weeding and considered life’s small interactions and their impact.

Joan Brady is a professional photographer; mentor and advocate for current and former foster children; volunteer with paws4People, Fairfax Families4Kids, and others; and a resident of Great Falls. Reach her at joan@joanbradyphotography.com