Rams score three in the seventh for walk-off win. 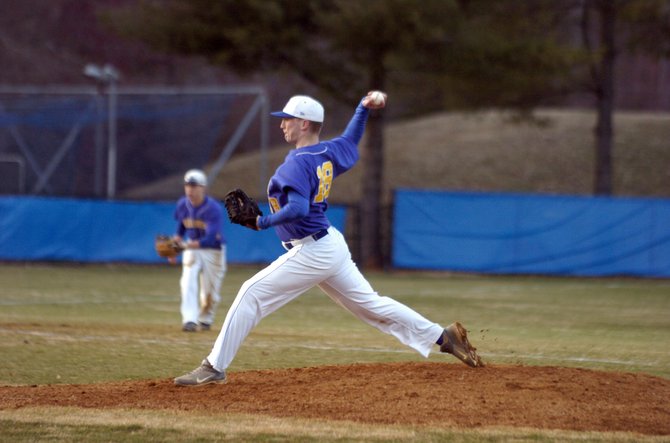 Down by two runs in the bottom of the seventh inning, Robinson rallied to ensure Marshall’s next miscue would be its last.

Robinson senior Kaden Darrow tied the score with a two-run single and Marshall catcher Mitch Blackstone’s throwing error allowed the winning run to score as the Rams pulled out a 6-5 victory at Robinson Secondary School.

Robinson trailed 5-1 in the second inning and 5-3 entering the bottom of the seventh, but found a way to improve to 3-0 with its second consecutive walk-off victory. The Rams defeated West Springfield 4-3 on March 24 and opened the season with a 7-2 win over Woodson on March 22. Marshall fell to 1-2.

“We played five innings, six innings, things weren’t really going our way and we found a way to pull it out,” Robinson head coach John James said, “and that’s a confidence builder.”

“We played five innings, six innings, things weren’t really going our way and we found a way to pull it out, and that’s a confidence builder.”

Leading 5-3 in the seventh, Marshall head coach Aaron Tarr moved senior left-hander Riley Cummins, who signed with the University of Virginia, to the mound to close it out. But Robinson loaded the bases with one out after two walks, a strikeout and a Statesmen error. Darrow’s two-run single tied the score at 5 and gave the Rams runners at the corners. During Tyler Fitchett’s ensuing at bat, Blackstone tried to throw behind the Ram runner at third base, but the catcher’s attempted pick-off sailed into left field, allowing the winning run to score.

Blackstone went 3-for-4 with a double at the plate and threw out two would-be base-stealers before his seventh-inning miscue.

Marshall catcher Mitch Blackstone went 3-for-4 at the plate and threw out two would-be base-stealers before making a key seventh-inning throwing error.

“[The runner at third] seemed to me that he was a little farther off the base then most people were,” Blackstone said. “I thought I could get [Marshall pitcher Riley Cummins] a quick out. … [The] ball just got away from me.”

Darrow’s two-run single put the Rams in a position to capitalize on the error.

The Statesmen took a 5-1 lead in the second inning thanks a Rams error. With the score tied at 1, Marshall had the bases loaded with two outs when Blackstone hit an infield pop-up. Robinson starting pitcher Shane Hopkins dropped the ball in front of home plate, allowing two runs to score. Marshall first baseman Patrick Evans followed with a two-run single, giving the Statesmen a 5-1 advantage.

Marshall returned the favor in the bottom of the fourth. Robinson had the bases loaded with two outs when Statesmen starting pitcher Will Brooke got Robinson senior Danny Herrera to pop up. But Marshall infielders appeared to lose sight of the ball, which fell to the ground for a two-run single, cutting the Statesmen lead to 5-3.

The performance of William & Mary-bound pitcher Chris Lohr also played a pivotal role in the Robinson comeback. Lohr came on in relief with one on and two outs in the top of the second inning and Marshall leading 5-1. After allowing a single to junior Shane Russell, Lohr picked the runner off first base to get out of the inning. The right-hander went on to pitch 5 1/3 innings of scoreless relief and earn the win.

“In that situation, I just try and pitch like it’s the start of the game,” Lohr said. “[I needed to] take the runners on base out of my mind and just get the batters one at a time until I get out of that inning and then it’s really just inning by inning.”

Brooke pitched well for Marshall but received a no decision. The senior right-hander pitched 5 1/3 innings, allowing three runs and five hits while walking four and striking out two.

Cummins took the loss, surrendering three runs --- one earned --- and one hit in 1/3 of an inning. He walked two and struck out one.

“Unfortunately for [Cummins], he got sick with the flu for like 10 days about two weeks ago, so he’s not at his midseason form yet, but we don’t worry about that,” Tarr said. “It gives guys like Will Brooke, who has pitched really well for us in both of his outings, it gives him an opening to demonstrate we’ve got a really, really good No. 2 guy, if you want to look at it that way. If you’ve got two guys that you can rely on and some bullpen guys that always get outs, [you will be in good shape].”

Robinson is scheduled to play at Fiarfax at 3 p.m. on Saturday. Marshall will travel to face Madison at 6:30 p.m. Monday.