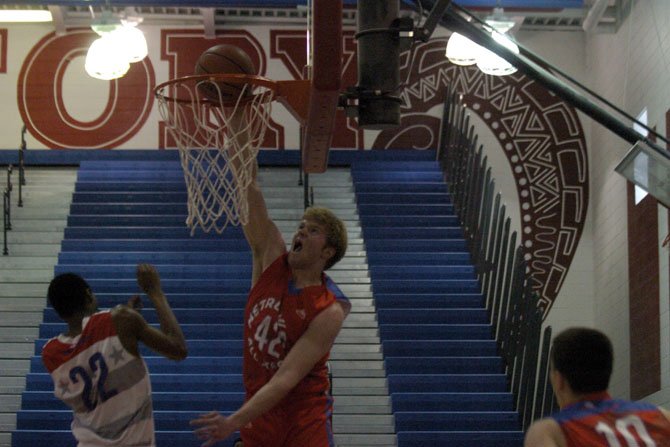 Woodson senior and West all-star Andy Stynchula goes up for a dunk during the 41st Annual Capital Classic. Photo by Craig Sterbutzel.

Woodson boys’ basketball coach Doug Craig led the West all-starts to a 126-115 victory over the East all-starts during the 41st Annual Capital Classic.

W.T. Woodson head coach Doug Craig convinced the West all-stars to play unselfish basketball prior to their matchup against the East all-stars at the 41st Annual Capital Classic.

The result was an early offensive explosion and one more victory in the prep basketball careers of nine Northern Virginia athletes.

The West all-stars scored 46 points in the first quarter and built a 33-point first-half lead en route to a 126-115 victory during the second of three games at the Capital Classic on April 26 at T.C. Williams High School. Eight of the nine athletes on the West roster scored in double figures, led by a 25-point performance from Herndon's Brandon Alston, who earned game MVP honors.

The West roster was composed of athletes from Northern Virginia schools, including Lake Braddock’s Will Gregorits, Woodson’s Andy Stynchula and Edison’s Marcus Brumsey, Jr. Gregorits, whose Bruins finished 6A North region runner-up and reached the state tournament this season, scored 13 points and grabbed 12 rebounds. He will play next season at the University of the Sciences, a Division II school in Philadelphia.

“We played great,” Gregorits said. “No one on the team was really selfish and that’s what really helped us win. Everyone was willing to share the ball and they didn’t care about the individual part of it. It was a lot of fun.”

What is the 6-foot-7 Gregorits most looking forward to about playing in college?

“The physicality,” he said. “I can’t wait for that side of it. This year, a major part of my game was to get more physical and I’ve already started that aspect of it. I can’t wait to get up there and just bang around.”

Stynchula, who was part of two region championship teams at Woodson, scored 10 points for the West all-stars.

“It’s always nice when one of your kids gets rewarded with an all-star game appearance at something like this,” Craig said. “Andy had a great career for us at Woodson and I’m real proud of him. He played well tonight, too, I thought.”

Bishop Ireton’s Patrick Moseh scored 18 points and grabbed 12 rebounds for the West. Moseh played his freshman season at Lee High School before transferring to the private school in Alexandria. He will play college ball at Wheeling Jesuit University.

“I thought I was rusty but I think I did a good job,” Moseh said. “… When I was a freshman, I never imagined I’d be here. I think the transition to the WCAC … helped me be more aggressive.”

Earlier in the day, the North all-stars defeated the South 109-106. Robinson’s Joe Bynum was named to the South team, but did not play due to injury.