Life as a Comic Frenzy
Votes

Life as a Comic Frenzy 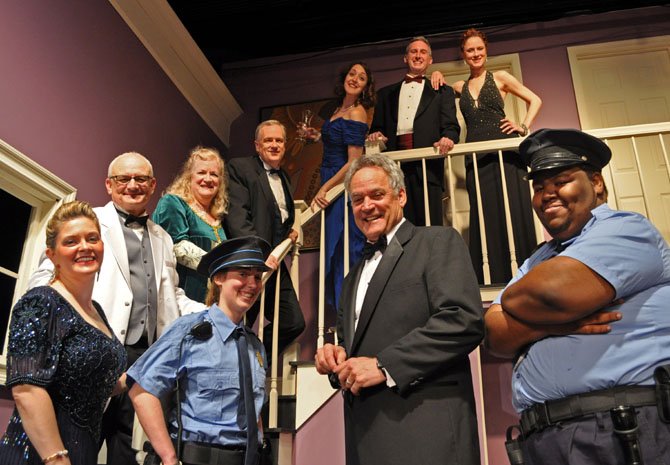 Women in lovely evening attire and men in snappy tuxedos were walking about the stage of the James Lee Community Center theater. It was an early dress rehearsal for the Providence Players (PPF) production of "Rumors," a farce by award winning playwright Neil Simon. The PPF cast was getting a feel for the set as final touches were being made to a tastefully decorated, contemporary two-story New York City apartment.

"Rumors" is directed by Liz Mykietyn. "Rumors" is a particular favorite of Mykietyn. It is "a show with lots of laughter and great physicality. It will appeal to everyone. There is just so much great comedy that everyone can relate to."

Mykietyn, who has appeared in a number of Providence Players productions, teaches acting workshops for StageCoachTheatre. She has assembled a cracker-jack cast of 10, including a number of newcomers for local audiences. In a recent interview, Mykietyn spoke enthusiastically about the chemistry of each of the on-stage characters and how each actor is developing an on-stage presence such as being "magnets for each other."

What is "Rumors" about? It is a comedy about four couples of various ages and generations hoping to celebrate the 10th wedding anniversary of New York’s deputy mayor. Alas, what was to be an evening of celebration turns into a frantic affair, full of off-stage gunshots, car accidents, no one to cook dinner, and assorted moments of total confusion. Oh, and there are plenty of rumors, gossip and innuendo. Then add the arrival of the police to investigate the gunshots and the couples are ready to hide.

Don Myers (Vienna) is one of the newcomers. While new to the Providence Players, he has worked the improv circuit in New York and Los Angeles. Myers finds the play "one of "high energy throughout, with a juicy script." He described his character Lenny as one with "all the snarky lines, with a New Yorker's edge to them."

Providence Players veteran, Zell Murphy described "Rumors" as a "high quality, Neil Simon comedy that will have the audience laughing from beginning to end."

The Providence Players will also be celebrating 10 years of performing at the James Lee Community Center Theater with the production of "Rumors.”

Chip Gertzog, " Rumors" producer, noted that "Ten years and 36 productions later, what better way to celebrate than to fill the theater with laughter, once again, with another comedy classic."