Chantilly: ‘Only Excellence Is Good Enough’ 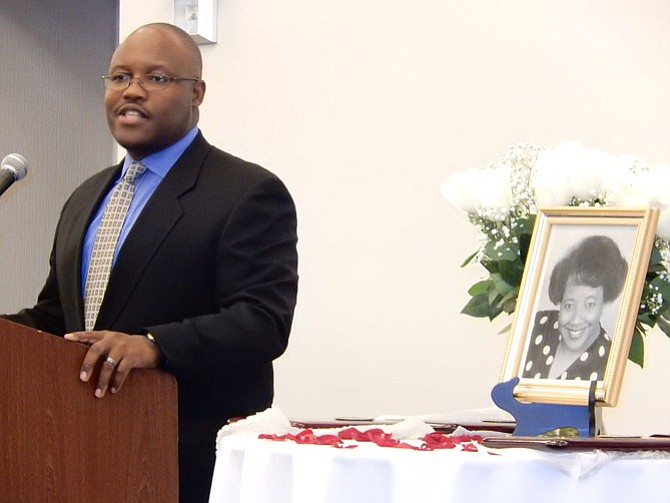 Mark Nelson speaks beside a photo of his late mother, Shirley Nelson. Photo by Bonnie Hobbs.

The Chantilly Pyramid Minority Student Achievement Committee (CPMSAC) has come a long way in 30 years — and there’s more work to be done. But Sunday night, it took time out to celebrate three decades of dedication to area youth.

Chris Singleton directs the Chantilly Jazz Band during the celebration.

“Our core mission is to help close the achievement gap of minority students,” said CPMSAC board member Chuck Coffin, Nov. 2, at the Hyatt Fair Lakes. “And through all the challenges, we haven’t lost our faith or wavered in our commitment toward moving forward.”

The late Shirley Nelson founded the nonprofit organization in 1984 at Chantilly Baptist Church. “Shirley took the tops off our daughter’s dance trophies and replaced them with lamps of learning,” said her husband, CPMSAC President Johnny Nelson. “Then she gave them to the top-achieving students at the church.” 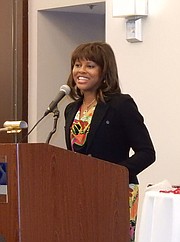 The program grew from there, but not without various threats to its existence. “During our early years, the school system didn’t know how to accept us,” said Nelson. “But the School Board stepped forward and supported us.”

Now, besides mentoring and tutoring all students needing help — not just minorities — CPMSAC acknowledges their progress and accomplishments at annual awards ceremonies and quarterly, honor-roll certificate programs. The organization, itself, has received many awards over the years and, on Oct. 28, the Fairfax County Board of Supervisors presented CPMSAC with a resolution recognizing how it’s impacted students’ lives.

Addressing all of CPMSAC’s board members, volunteers, school personnel, church members, businesses and others who supported it through the years, Nelson said, “It’s been 30 years and CPMSAC is alive and well. And it’s because of God’s blessings, the life and legacy of Shirley Nelson, and every one of you.”

His son, Mark Nelson, said he and his sister, Meka Sales, both work for nonprofits and understand the challenges they face. “My mother’s mission to help children keeps her alive for us,” he told the crowd. “Thank you for adopting her vision as your own.”

Sales said her mother’s motto, “Only excellence is good enough,” gave Shirley Nelson the courage to walk into the Chantilly High principal’s office in 1984, demanding to know in what areas black students weren’t achieving and why not. And now, thousands of minority students are honored each year during CPMSAC’s two-day awards celebration.

“Her work was exhausting, but she’d discovered her God-given purpose,” said Sales. “And it infused her with joy and fueled everyone else to carry out her vision. She enacted volunteerism and encouraged others to stand with her.”

“Her philanthropy was a love of mankind, and that’s what this organization is all about,” continued Sales. “She was a fierce advocate of service and high achievement and knew that minority kids needed mentorship, plus good role models and examples of success, encouragement and support.”

Hunter Mill Supervisor Cathy Hudgins thanked the Nelson family for giving so much to this county. And she said children still need the motivation CPMSAC gives them.

“Fairfax County really has to move forward and close the achievement gap,” she said. “We’re better than that. This anniversary is a milestone and demonstrates your leadership role [in the community].”

School Board Vice-Chairman Ted Velkoff said parents are their children’s first teachers and CPMSAC was created for the entire community’s children.

He said not all children are born into families that can help them learn and achieve — not all parents can attend meetings with teachers, have the time or ability to help with homework or can even speak English. And, said Velkoff, “It’s in no one’s best interests to have students graduate without the skills they need to succeed.”

Frances Ivey calls CPMSAC “a model of advocacy and support.”

He said 33 percent of last year’s kindergartners came into FCPS in poverty and receive free and reduced-price lunches; and 50 percent of those kindergartners speak a language other than English at home. “And by the end of the decade, we’ll have 200,000 students,” he added. “So costs are rising — and doing what we’ve always done won’t be enough.”

Thirty years from now, said Velkoff, “Schools will have to orient students to achieving in the real world, and not passing SOL tests. They’ll need community support for students at the greatest risk; there’s no CPMSAC in other areas of the county. We must have visionaries in government — people providing what we need now so we’ll end up where we want to be in 30 years. And we should demand our elected officials make it happen.”

Barbara Tyler (on left) is honored by Sye Smith and Christy McFerren for her many years of service to CPMSAC.

Fabio Zuluaga, FCPS Region 2 assistant superintendent, congratulated CPMSAC on its anniversary. “For 30 years, this incredible organization has made a difference in children’s lives. It reflects what determination, perseverance and hard work are all about, and we celebrate your accomplishments.”

Region 5 Assistant Superintendent Frances Ivey said FCPS has “tremendous appreciation and respect” for everything CPMSAC’s done over the past three decades. A former teacher at Chantilly and Westfield high schools, she said, “I’ve personally and professionally seen the benefits of this work. You are truly a model of advocacy and support.”

Ivey said children should be communicators, collaborators, ethical and global citizens, creative and critical thinkers and goal-directed individuals, and CPMSAC teaches them these skills. She also noted that FCPS is working on an ideal “Portrait of a Graduate” so that, hopefully, all students will someday embody these attributes. 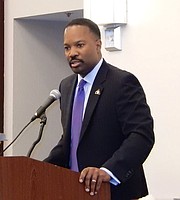 Rocky Run Middle Principal Anthony Terrell said CPMSAC began in the school system at Rocky Run. Through this organization, he said, “Students learned that being smart was cool. And for many of them, CPMSAC was the beginning of a lifetime of scholarship, leadership and service. The Chantilly Pyramid has a rich history of taking care of its own, and I look forward to helping CPMSAC continue achieving its goals over the next 30 years.

NVCC Math Department Chair Patricia Gary said two-thirds of the college’s recent growth came from minority students and NVCC is proud to provide mentors for CPMSAC. She said she and her husband joined CPMSAC years ago when their children needed additional help with school. “They got mentorship, love and growth, and we thank you,” said Gary.

Also speaking was William Cox, president/CEO of Diverse Issues in Higher Education. “Shirley Nelson saw the voids in FCPS and devised a plan to fill them,” he said. “She started an organization to promote academic achievement, equal opportunity, diversity and success in college and the world of work.”

The Rev. Jerry Bryant, pastor of Chantilly Baptist Church, said many students “can trace their success back to CPMSAC.” He then thanked God for “those who’ve dedicated themselves to education” and asked His blessing to “empower CPMSAC with the support it needs to go forward.”