Lake Braddock will face Westfield in 6A North semifinals Saturday. 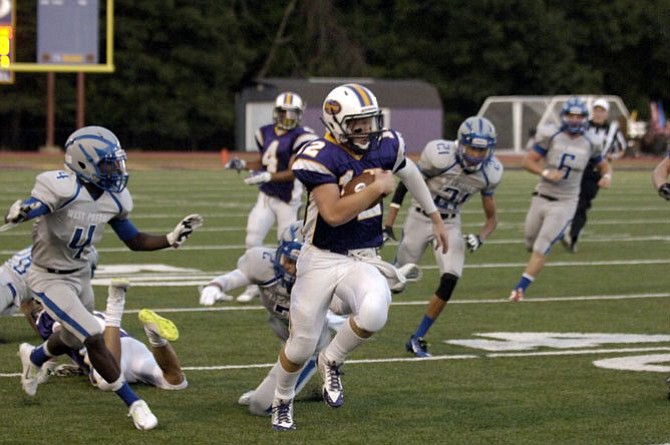 Kyle Edwards was a varsity standout for the Lake Braddock football program during his sophomore year, earning second-team all-conference honors as an offensive utility player and safety.

The Bruins won their first 12 games of the 2013 season and were seemingly on their way to the region championship game, leading Westfield by 13 points in the fourth quarter of their semifinal matchup. The Bulldogs came storming back, however, and handed the Bruins a 19-16 season-ending defeat.

This year, Edwards, now a junior, made the move to quarterback, taking over for the graduated Caleb Henderson, a highly recruited signal caller who ended up at the University of North Carolina. It took time for Edwards to get comfortable leading the Lake Braddock offense, but he eventually earned first-team all-conference accolades at his new position.

After playoff victories against Oakton and West Springfield, Edwards and the Lake Braddock Bruins find themselves in a familiar position: preparing to face Westfield in the region semifinals. Kickoff is scheduled for 1:30 p.m.on Saturday, Nov. 29 at Westfield. The winner will face the winner of the other semifinal matchup between Centreville and Battlefield.

Edwards, who also plays basketball and baseball at Lake Braddock, plans to play football in college. He recently participated in a Q&A via email with The Connection, sharing some insight about his Thanksgiving plans.

Edwards: Obviously, I will be spending a lot of time with my family. Right now it looks like family dinner is at my house, and all the relatives will be over. Should be a great time.

*Q: What will the Lake Braddock football team do on Thanksgiving?

Edwards: At Lake Braddock, our tradition is to have a morning practice on Thanksgiving. The breakfast that follows it is legendary and it’s really something we as players look forward to and earn.

*Q: How does it feel to still be practicing as Thanksgiving comes around?

Edwards: It’s something I experienced last year as a sophomore and was lucky to be a part of. It is definitely exciting to have the opportunity again

Edwards: We keep it simple and just enjoy the holiday. Only tradition I can think of is tearing off the wishbone and seeing who gets the bigger half.

Edwards: I definitely have a sports family. We watch football all day and play around in the backyard with our neighbors and relatives.

Edwards: I have always been a pumpkin pie kind of guy.

*Q: Lake Braddock was in this position last year, facing Westfield in the region semifinals. The Bruins lost a late lead and the game. Is there anything you took away from that experience that can help you this time?

Edwards: Well, I think just being on the field and playing against a physical and talented Westfield team gave me a lot of key experience that would then carry over into this year. I think I’ll be able to just relax and focus on the game because I have played on a Saturday in front of a few thousand people before. After last year’s loss, I learned the importance of finishing games and executing so that has been something Coach [Jim] Poythress harps on all season.

*Q: As a quarterback, how do you feel at this point of the season compared to your season opener against West Potomac when you were making your first start at a new position?

Edwards: Coach Poythress and Coach Quigley have done a great job in helping me grow as a quarterback. The main difference is confidence, but they instilled that in me by letting me mature as a passer, and now we’re really spreading the ball around the field through the air. I feel significantly more comfortable in the pocket and with our game plans.

*Q: Who is your favorite music artist? Why?

Edwards: Michael Jackson. He has endless hits, and his music is timeless.

*Q: What is your favorite movie? Why?

Edwards: “A Few Good Men.” Tom Cruise is one of my favorite actors. This movie made me want to pursue a law degree. It’s an iconic movie: "You can't handle the truth!"

Edwards: Peyton Manning and Brett Favre (even though he is retired). I admire how they play the game and their work ethic.