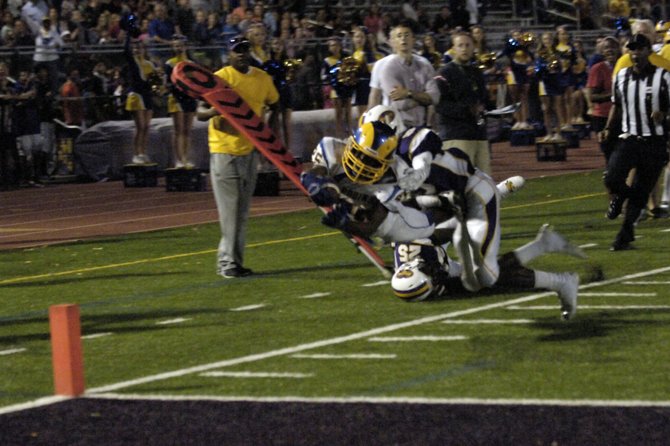 Robinson running back Marcus Denham dives into the end zone for a second-quarter touchdown against Lake Braddock on Friday night. Photo by Craig Sterbutzel.

Robinson sophomore Roman Lowery carries the ball during the Rams' 19-17 win over Lake Braddock on Friday.

Vossler, Robinson’s fourth head coach in five seasons, has his sights set on returning the once-powerful Rams to prominence, and that includes knocking off the region's elite. Robinson started the year with victories against Lee and Woodson, programs which combined for a 5-16 record in 2013. The Rams won eight games and reached the second round of the playoffs last season when Vossler was the team’s defensive coordinator, but Robinson went a combined 0-4 against Lake Braddock (12-1, reached the region final four), Westfield (region runner-up) and Centreville (state champion).

“We challenged them the other day about beating a contender,” Vossler said. “The seniors really hadn’t done it yet. I’ve been here for three, four years and every time we played one of the powerhouses, we’ve lost.”

Friday’s game started as a matchup of 2-0 teams. It ended with Vossler motioning from the sideline for Robinson fans to increase the decibel level of their celebration.

Robinson defeated Lake Braddock 19-17 at Lake Braddock Secondary School in Burke. The Rams built a 19-0 lead with a bruising running game and strong defense before surviving a late Bruin rally.

Trailing 19-11, Lake Braddock quarterback Kyle Edwards threw to a wide-open Evan Eschenburg for a 21-yard touchdown with 1:08 remaining in the fourth quarter. The Bruins’ two-point conversion attempt failed, and Robinson recovered the ensuing onside kick attempt to secure the victory.

“We’ve got kids that haven’t won big in a while and they want it real bad,” Vossler said. “… We had an opportunity here and we went at it with everything we had.”

It was Robinson’s first victory over Lake Braddock since 2011.

The Ram offense succeeded in traditional Robinson style --- lining up in the wing-T and pounding out yards on the ground. Running backs Marcus Denham, Sean Foncha, Roman Lowery and Dajon Lee combined for 51 carries, 252 yards and three touchdowns.

“I thought we ran it well,” Vossler said. “… [The Bruins] were loading up [the box]. We probably could have thrown it once or twice but that’s not who we are. We think when people put 11 in there, we’ve also got 11 in there and our 11 are better than theirs.”

“Our mentality is Coach Vossler wants to bring back the Rams’ tradition of being a tough-nosed, physical, run-the-ball-down-your-throat team,” Denham said, “and we’re going to continue to do that until otherwise shown that we have to change.”

The Robinson defense limited Lake Braddock to just two first downs in the opening half, including one resulting from a pass interference penalty. The Rams forced a turnover on downs at their own 36 late in the first quarter, and Hicks intercepted Edwards at the Robinson 22 late in the second quarter.

“We thought our guys were pretty good against [the] spread,” Vossler said. “We’re pretty athletic, we’re a little smaller, we think we match up well against that. Our D-line gets after it. Our kids just played with great effort, and when you do that, you cover up mistakes.”

Robinson kept Lake Braddock off the scoreboard until the final minute of the third quarter. Facing second-and-10 at the Lake Braddock 45-yard line, Edwards completed a deep pass to Eschenburg, who fumbled into the end zone. A Lake Braddock player recovered the loose ball for a touchdown. A two-point conversion cut the Robinson lead to 19-8.

Lake Braddock kicker Nicholas Bruhn booted a 27-yard field goal with 2:50 remaining in the fourth quarter and the Bruins added a late touchdown, but Robinson held on for the win.

What did Friday’s victory mean to Vossler?

“It means the world,” he said. “I think it gives us some credibility to what we’re doing, that we can play smashmouth football in 2014 when not many people do it anymore, and we’re trying to continue that.”