"Take Me Out": A drama leavened with brilliant comic touches. 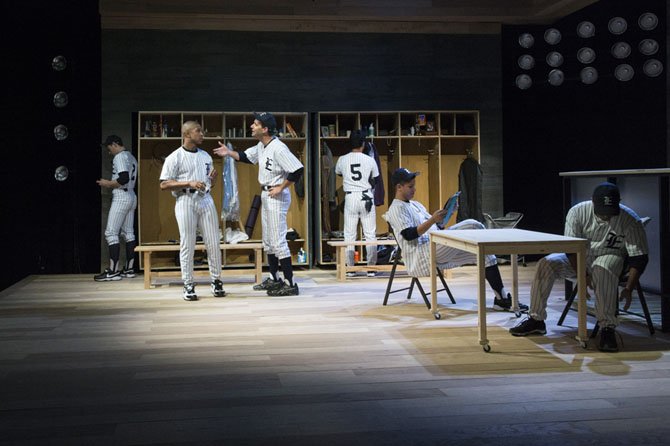 From left -- Jaysen Wright and Adam Downs in "Take Me Out" at 1st Stage. The show runs through Oct. 12.

Stepping out into its new season, 1st Stage in Tysons brings audiences a satisfying production of "Take Me Out," winner of a Tony Award for Best Play and a Pulitzer Prize finalist. A seemingly baseball-centric play, the ball field and locker room become much more then fields of dreams.

"Take Me Out" is not so much about playing the game of baseball. Rather it is a drama leavened with brilliant comic touches and robust performances that take on big issues including the consequences of bigotry, race, homophobia, communications break-downs, fears and fate.

Written by the prolific Richard Greenberg and confidently directed by Doug Wilder, the show is staged for mature audiences.

The show's focus is on the star center fielder of the Empires. He is bi-racial and decided to "come out" as Gay during mid-season. From there team dynamics fall apart and the team goes on a losing streak. A new pitcher is brought up from the minors. While a brilliant pitcher, he openly clashes with others after going public with bigoted views about those who do not meet his definitions of a true American.

The eleven member cast is fearless giving all of themselves to their characters. Noteworthy performances include Jaysen Wright as the superstar Gay ball player. Wright gives off a sense of arrogance, entitlement and smugness that may make him a great ballplayer but not always a likeable character. His sharp points give him real-life complexity.

Sun King Davis is a well-educated Empire teammate speaking with a steady stream of words directly to the audience as the narrator of the proceedings. He tries to help explain "how the whole mess started." He also has his own inner conflicts that readily appear as time goes by. Ryan Kincaid is the bigoted pitcher. He is an accomplished raging bull in the role.

The brightest star of the production is a non-ball player: a wide-eyed, nebbish, fey accountant played by Adam Downs. He steals the show with his observations about the almost mythical importance of baseball to America, conveyed with nervous mannerisms and hands that never stop moving in the air. His words come fast and furious.

A thoughtful production about major matters for mature audiences.