Burke Filmmaker’s Work Will Help Others

Monica Zinn is just 21, but she’s already made two documentaries with the potential to change people’s lives for the better. And now, both have been selected for distribution to K-college schools, hospitals, clinics and rehabilitation programs in English-speaking countries worldwide. 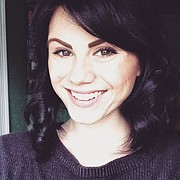 A part-time resident of both Burke and Los Angeles, she graduated from Lake Braddock Secondary School in 2011. But she attended the Fairfax Academy from 2009-11, where she learned and honed the skills she uses as a successful, independent, documentary filmmaker.

Zinn always loved stories and wanted to write them, herself. But a tragic event in her own life made her focus take a serious turn.

“In my junior year in high school, there was a death in the family and that changed my perception on stories,” she explained. “I no longer wanted to make films about fictitious subjects and moved toward non-fiction – the stories that are right in front of people, but are ignored.”

And at the Fairfax Academy, Zinn found the support, guidance and encouragement to follow her dreams. “I credit any success I have to the Fairfax Academy, where I took professional Television Production classes for two years,” she said. “They really gave me the resources and environment I needed and nurtured my creativity. They promoted professionalism and helped jumpstart my career.”

SHE MADE HER FIRST FILM in 2011 at age 17. Titled “Perfection,” it’s a documentary about eating disorders in young women. The film focuses on three such women, examining prominent themes they share that led to their disorders. It screened at seven film festivals across the country, including the Santa Cruz Film Festival, and won Best Documentary at the Virginia Student Film Festival in 2012.

Zinn’s most recent film, “Self-Inflicted,” on non-suicidal self-injury, was completed while she continued to pursue her communications degree at the University of Southern California in Los Angeles. Slated for wide release later this year, it examines the psychology behind this type of behavior and the environmental factors that can influence it.

“The film also shines a light on the sociological manner in which people react to different types of mental illness and so-called odd behaviors,” said Zinn. “And it features top researchers in non-suicidal self-injury, as well as a range of self-harmers.”

Both her films caught the eye of Human Relations Media (HRM), a leading publisher of educational materials for students in grades kindergarten through college. Its programs help young people learn the essentials of health, substance-abuse prevention, math, science, career planning and character. Toward this end, it’s chosen Zinn’s films to distribute to schools, hospitals, clinics and rehab centers both in the U.S and internationally.

SHE EDITED the films down to 20 minutes for HRM’s distribution, but both “Perfection” and “Self-Inflicted” will be available online later his year in their extended versions. Each film will come with a resource packet for teachers, filled with discussion points and in-depth information on the films’ topics to better help reach viewers. For more information, go to http://www.monicazinn.com/self-inflicted.html.

And Zinn couldn’t be happier. “What’s happening with the films is everything I could have ever wanted for the both of them,” she said. “It’s better than getting into any film festival or winning any awards, because – while those things make me look good and are fun experiences – this is the widest platform possible for my target audience. So it feels pretty amazing to know that films I’ve created while in school will be shown in schools, hospitals and rehabilitation facilities around the world.”

As a bonus, HRM has already indicated its interest in funding her next project, whenever she decides to do another one. Meanwhile, though, Zinn’s delighted that her work is considered substantial and important enough to be used to help people struggling with whatever challenges they face.

“I’m excited to hopefully hear how these films are affecting others,” she said. “I certainly hope they cause a big change in the way we all think about ourselves and mental illness. I hope they create more avenues for recovery and support for those who need it. Mainly, I hope they just help us all be more honest with ourselves and each other – to share what we’re feeling and know that it’s OK. Surely, if they give anyone any semblance of hope, I’m satisfied,” Zinn said.